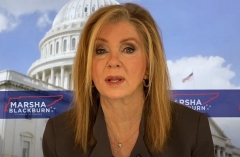 President Joe Biden’s budget proposal, which would rack up $14.5 trillion in cumulative deficits over the next 10 years, is “out of control,” Senator Marsha Blackburn (R-Tenn.) said Thursday.

At the U.S. Capitol, CNS News asked Senator Blackburn: “President Biden has presented Congress with a budget that proposes running $14.5 trillion in deficits over the next decade. Will Congress ever balance the budget?”

While she did not answer the question directly, Blackburn said she’s been pushing for a balanced budget ever since she was first elected, and that the citizens of her state are getting worried about how much Pres. Biden wants to spend:

“I’ve called for a balanced budget and a balanced budget amendment since my service in the House, and the budget that President Biden has offered is something that gives — well, let me say it like this – there are people in Tennessee that have asked me if this could possibly be serious. That’s how out of control it is.”

In a Senate hearing on Tuesday, Blackburn expressed concern about the lack of funding that Biden’s proposed budget provides for national defense, border security and small businesses. The senator said the budget plan “reads like an instruction manual on how to make our country less secure, less free, and less competitive.”

As The New York Times has reported, "President Biden would like the federal government to spend $6 trillion in the 2022 fiscal year, and for total spending to rise to $8.2 trillion by 2031. That would take the United States to its highest sustained levels of federal spending since World War II, while running deficits above $1.3 trillion through the next decade."  (Emphasis added.)