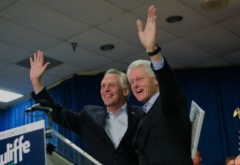 (CNSNews.com) - Democrat Terry McAuliffe, the former Virginia governor who failed in trying to retake the governorship on Tuesday, had problems appealing to male voters, according to the exit poll published by CNN.

McAuliffe margin of victory among women--53 percent to 47 percent--was not as large.

Among white voters of both sexes, Youngkin won 61 percent to 38 percent; and among voters of color McAuliffe won 78 percent to 22 percent.