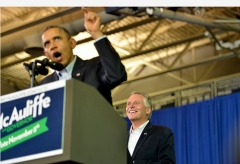 (CNSNews.com) - Republican Glenn Youngkin, who defeated Democrat Terry McAuliffe in Tuesday's gubernatorial election by 50.68 percent  to 48.55 percent, beat McAuliffe 51 percent to 49 percent among voters who have children under 18, according to the exit poll published by CNN.

According to that exit poll, Youngkin was particularly popular among fathers—if not so much among mothers.