Herschel Walker: ‘The Democratic Party Has Become a Party of…Violence, Lawlessness, No Faith, No Family’ 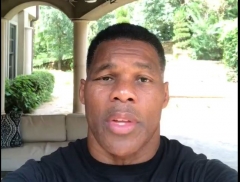 (CNSNews.com) - College Football Hall of Famer Herschel Walker sent out a tweet on Saturday expressing his criticism of the Democratic Party and telling Republicans they “better wake up and fight.”

“The Democratic Party has become a party of name calling, intimidation, violence, lawlessness, no faith, no family, no schools, depend on the gov’t, anti American…and no FUN!” Walker said in his tweet.

“#remember9/11 and #Give me liberty or give me death,” Walker said in the tweet.

The tweet also included a video clip of Walker delivering a message.

“Wow. If some of the things the past administration has done, and now over 20 something people who know better is wiping their phones, Republicans, I want to tell you, you guys better wake up and get in the fight,” Walker says on the video.

“Now,” he said, “if the scales of justice only fall one way, then maybe the reason a lot of these Democratic mayors and governors in these cities are not backing the blue and let the violence continue. Because if there is only law just for one side, there is really no law at all.”