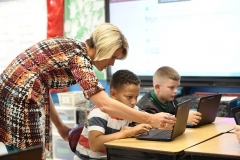 The new law says state and local government agencies or entities and public schools “may continue training that fosters a workplace and learning environment that is respectful of all employees.”

However, the law bars training that teaches or promotes “stereotyping, scapegoating, or prejudice toward others on the basis of demographic group membership or identity.”

Race or sex stereotyping means “ascribing character traits, values, moral and ethical codes, privileges, status, or beliefs to a race or sex, or to an individual because of the individual's race or sex.”

“Critical Race Theory is about labels and stereotypes, not education,” Reynolds said in a statement. “It teaches kids that we should judge others based on race, gender or sexual identity, rather than the content of someone’s character.”

Reynolds said she is “proud to have worked with the legislature to promote learning, not discriminatory indoctrination.”

The bill, House File 802, does not prohibit the teaching of sexism, slavery, racial oppression, racial segregation, or racial discrimination.

But the bill does define ten "specific concepts" that may not be taught, advocated or promoted, as follows.

(1) That one race or sex is inherently superior to another race or sex.

(2) That the United States of America and the state of Iowa are fundamentally or systemically racist or sexist.

(3) That an individual, solely because of the individual's race or sex, is inherently racist, sexist, or oppressive, whether consciously or unconsciously.

(4) That an individual should be discriminated against or receive adverse treatment solely or partly because of the individual's race or sex.

(5) That members of one race or sex cannot and should not attempt to treat others without respect to race or sex.

(7) That an individual, by virtue of the individual's race or sex, bears responsibility for actions committed in the past by other members of the same race or sex.

(8) That any individual should feel discomfort, guilt, anguish, or any other form of psychological distress on account House File 802, p. 4 of that individual's race or sex.

(9) That meritocracy or traits such as a hard work ethic are racist or sexist, or were created by a particular race to oppress another race.

Opposition to the bill came from the Council on American-Islamic Relations (CAIR), which said it is “wrong” to ban “important discussion of the systemic anti-black racism and white supremacy that continues to harm our nation.”

As of June 14, according to Education Week, legislators in 21 states have introduced bills that would restrict teaching critical race theory or limit how teachers can discuss racism and sexism, according to an Education Week analysis. Four states, including Iowa, Tennessee, Idaho and Oklahoma, have signed these bills into law.