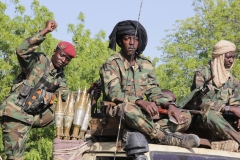 (CNS News) – On Saturday, June 5, the Committee to Free Nigerian Slaves (CFNS) will  hold a demonstration in Omaha, Neb., (72nd and Dodge Street, 10:00 a.m.) to speak out against “the mass murder and enslavement of Nigerians in what has been a cruel religious war,” said the organization in a press release.

“Since 2001, Boko Haram terrorists, Fulani militants, and other extremist groups tied to the Islamic State and al-Qaeda, have raided Nigerian villages, killed tens of thousands, and enslaved an untold number of women and children,” said the CFNS.

CFNS member Stephen Enada, president of the International Committee on Nigeria (ICON), said, “In Nigeria, jihad terrorists are storming our villages and murdering our people. So far this year over 1,500 Nigerians, who are mostly Christians, have been murdered by these jihadists and over 2,000 people have been abducted or kidnapped. The situation is dire. We can no longer sit in silence as our brothers and sisters in Nigeria are being captured and enslaved.”

“I’m confident that if we bring these facts to more people, more people will get angry and start making a difference,” said Samuel Akough, a local Nigerian American activist from Omaha.

According to the press release, “Nigeria is ranked third in the 2020 Global Terrorism Index (GTI) of countries most impacted by terrorism. Since 2014, Fulani militants — a small, extremist portion of the Fulani people — have accelerated the conflict with Nigerian Christians at an alarming rate. Fulani militants are reportedly responsible for 7,400 deaths since 2015, targeting and attacking whole communities, schools, and households.”

“Boko Haram has formally pledged allegiance to the Islamic State, and, since 2009, it is believed responsible for murdering approximately 30,000 innocent people and displacing at least two million.”

The CFNS hopes that the protest and speakers will inspire Senator Ben Sasse (R-Neb.) “to take our information and use it to force the U.S. to put pressure on the Nigerian government to forcibly free the slaves.”

The Free Nigeria Slaves’ website says that the boys who are kidnapped are “beaten and brainwashed into becoming child soldiers.”

One of the captured children is Leah Sharibu. She was kidnapped from her school in Dapchi, Nigeria, in 2018 at the age of 14 and is enslaved to this day because she refuses to deny her Christian faith.

“Nigerian women and girls like Leah Sharibu who are enslaved by Boko Haram terrorists should never be abandoned or forgotten in captivity,” said Dr. Gloria Puldu, president of the LEAH Foundation and a CFNS member.

“We are calling on every concerned citizen to rally for Nigeria. If we speak up and raise our voices we can End Slavery Now!” petitions the Free Nigerian Slaves website.