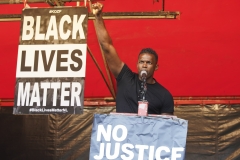 On its website, Black Lives Matter states that it is “a collective of liberators” who want to move beyond “narrow nationalism” and affirm the “lives of Black queer and trans folks … and all lives along the gender spectrum.” However, polls show that affirming Black homosexuals and transgender persons apparently is not a top priority for many Black Americans, especially for those who are religious.

In Pew’s 2013 poll, “only 32%” of Black Protestants supported same-sex marriage.

By 2017 that percentage had risen to 44% of Black Protestants, but that is still less than a majority. It also doesn’t reveal opposition or approval to gay marriage among Black Muslims, Catholics or evangelicals.

For American adults (all races) who go to church at least once a week, only 39% favor same-sex marriage in 2019, according to Pew.

For Blacks in general – not based on religious views -- 51% favor same-sex marriage, according to the 2019 Pew poll.

When CNS News asked Bishop E.W. Jackson, the great-grandson of slaves from Orange County, Va., about Black Lives Matter and its pro-LGBT emphasis, he said, “I’m convinced that it’s not about black lives. It’s about the political agenda of the left. It’s a Marxist, socialist, even communist agenda that seeks to tear down Judeo-Christian values, to tear down the traditional family, to tear down America, frankly, and the principles upon which we were built.”

Jackson, a former Marine who earned his J.D. from Harvard Law School, is the pastor of Exodus Faith Ministries and the founder of STAND (Staying True to America’s National Destiny). He also is the host of The Awakening Radio Program with Bishop E.W. Jackson.

As for BLM’s promotion of the LGBT agenda, Jackson told CNS News, “The reason why they are big on the LGBT movement is that that’s another part of the whole far-left agenda, which involves deconstructing our moral framework, deconstructing the family, and ultimately, again, in my view, deconstructing America.”

“They want to make America into something very, very different than the constitutional Republic that we are,” he said.  “And, so, here again, Black Lives Matter is just a really smart marketing tool that they are using to advance an agenda that has nothing to do with saving black lives.”

In Jackson’s view, those who hold traditional views of marriage, family, and sexuality in the Black community are more than underrepresented. He believes the mainstream media and most of the institutions of cultural influence, including colleges, universities, the entertainment culture, and even the public schools, are hostile to traditional values and ideas.

Jackson said there is a vast middle that holds to traditional values but does not speak up out of fear. He pointed to a Sacramento Kings play-by-play announcer who was fired by his radio station because he tweeted, “All Lives Matter."

“Well, if that’s the result, you’ve got a lot of people who simply will not speak up because they are afraid of the impact it might have, not only on their reputation and what they will maybe face among their peers, but their very livelihood,” said Jackson.

Dr. Alveda King, niece of the late Dr. Martin Luther King Jr., said several years ago that neither her grandfather nor her uncle “embraced the homosexual agenda.”

Rev. William Owens, founder of the Coalition of African American Pastors, said, “We who marched with Rev. King did not march one inch or one mile to promote same-sex marriage.”

According to Pew research, 79% of Black Americans identify as Christian and 53% of them identify specifically as Protestant.