Homeland Security: ‘More Than 66,000 Afghan Evacuees Have Been Resettled in Communities Across the Country’ 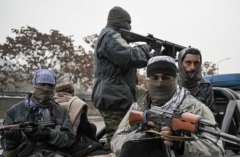 (CNSNews.com) - The Department of Homeland Security put out two press statements on Wednesday announcing that the last Afghan refugees have been released into the United States from Camp Atterbury in Indiana and Holloman Air Force Base in New Mexico.

“To date, more than 66,000 Afghan evacuees have been resettled in communities across the country,” said DHS.

DHS noted that there are another 9,000 Afghans at four other military bases in the United States waiting for their own release into the country.

“DOD continues to provide temporary housing facilities for the remaining approximately 9,000 vulnerable Afghans who are in the process of completing their resettlement while at the following four military installations: Camp Atterbury, Indiana; Fort McCoy, Wisconsin; Fort Pickett, Virginia; and Joint Base McGuire-Dix-Lakehurst, New Jersey,” said DHS.

"Congress has enacted a series of legislative provisions since 2006 to enable certain Iraqi and Afghan nationals to become U.S. lawful permanent residents (LPRs)," the Congressional Research Service explains. "These provisions make certain Iraqis and Afghans who worked as translators or interpreters, or who were employed by, or on behalf of, the U.S. government in Iraq or Afghanistan, eligible for special immigrant visas (SIVs)."

"The parole provision in the Immigration and Nationality Act (INA)," says the Congressional Research Service, "gives the Secretary of the Department of Homeland Security (DHS) discretionary authority to 'parole into the United States temporarily under such conditions as he may prescribe only on a case-by-case basis for urgent humanitarian reasons or significant public benefit any alien applying for admission to the United States."

"Parole,” the CRS notes, “does not grant, nor entitle beneficiaries to later obtain, a lawful permanent resident (LPR) status.”

“As of January 27, the U.S. has welcomed more than 76,000 Afghans to the United States through Operation Allies Welcome, providing them with support and assistance as they begin their new lives in America – and we are prepared to welcome additional qualifying Afghans over the coming weeks and months,” DHS said in its statement on Wednesday.

In a September interview with CNSNews.com, Rep. Chris Smith (R.-N.J.) raised concerns about the vetting of the Afghans brought into the United States, noting that among those brought to Joint Base McGuire-Dix-Lakehurst in his home state, 70 percent were parolees who had not worked to help the United States during the conflict.

“Do you think it is a problem with these parolees that they brought into New Jersey?” CNSNews.com asked Smith.

“I think it is a very serious problem,” Smith he said. “It could have an answer if they can find out who exactly that they are. Some of the women and children, especially, probably, the presumption would be that they’re okay. But there are others that would raise some very serious questions that reasonable people need to ask. And I asked that question when I was on the base visit. More than 70 percent of the people that were at Fort Dix then—it hasn’t changed, as far as I can ascertain—were parolees. Humanitarian parolees. Not SIVs.”

“Since the beginning of Operation Allies Welcome, service members at this and seven other military installations provided essential support, ensuring Afghan nationals had safe and secure conditions while they completed resettlement requirements and prepared to transition to their new communities across America,” said Gen. VanHerck. “As Task Force Holloman concludes its support to the operation, the service members and the entire team should take great pride in all they accomplished.”