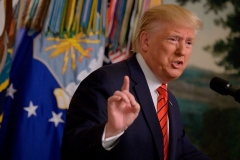 (CNSNews.com) - "Look, we don't want to keep soldiers between Syria and Turkey for the next 200 years," President Trump told the nation on Sunday. "We're out," he said. But.

"But we are leaving soldiers to secure the oil," the president said. He even mentioned sending ExxonMobil into Syria to extract the oil "properly."

Trump noted that Syria has "massive amounts of oil," and he admitted U.S. troops "may have to fight" to protect it.

"Maybe somebody else wants the oil, in which case they have a hell of a fight but there is massive amounts of oil and we're securing it for a couple of reasons. Number one, it stops ISIS because ISIS got tremendous wealth from that oil. We have taken it.  It’s secured.

"Number two — and again, somebody else may claim it, but either we’ll negotiate a deal with whoever is claiming it, if we think it’s fair, or we will militarily stop them very quickly.

"We have tremendous power in that part of the world. We have -- the airport is right nearby. A very big, very monstrous, very powerful airport and very expensive airport that was built years ago." (He apparently was talking about the U.S. military base in Turkey).

"We're in that Middle East now for $8 trillion," Trump added.

Later in his remarks, Trump returned to Syria's oil, saying that Sen. Lindsey Graham (R-S.C.) agrees with him on protecting the oilfields and even sending a U.S. company in to extract the oil:

But where Lindsey and I totally agree is the oil. The oil is so valuable for many reasons.

It fueled ISIS, number one. Number two, it helps the Kurds. Because it has basically been taken away from the Kurds. They were able to live with that oil.

And number three, it can help us because we should be able to take some also. And what I intend to do, perhaps, is make a deal with an ExxonMobil or one of our great companies to go in there and do it properly. Right now it is not big. It is big oil underground but it is not big oil up top. And much of the machinery has been shot and dead. It has been through wars. But -- and spread out the wealth.

But no, we're protecting the oil. We're securing the oil. Now that doesn't mean we don't make a deal at some point. But I don't want to be -- they are fighting for a thousand years. They're fighting for centuries. I want to bring our soldiers back home, but I do want to secure the oil.

If you read about the history of Donald Trump, I was a civilian. I had absolutely nothing to do with going into Iraq and I was totally against it. But I always used to say, if they're going to go in -- nobody cared that much, but it got written about -- if they are going to go in -- I'm sure you've heard the statement because I made it more than any human being alive, if they are going into Iraq, keep the oil. They never did. They never did.

And by one vote they were unable to get that approved in the Senate. They had some pretty big opposition from people that shouldn't have opposed like a president and they weren't able. If you did that Iraq would be a much different story today because they would be owing us a lot of money. They would be treating us much differently. But I will say Iraq was very good with respect to the raid last night...