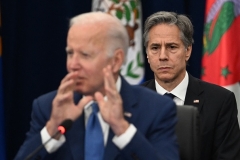 President Biden has vowed that Iran will never get a nuclear weapon. (Photo by JIM WATSON/AFP via Getty Images)

(CNSNews.com) - "We still believe there is the potential to conclude a mutual return to compliance with the Joint Comprehensive Plan of Action, if Iran were to set aside issues that are extraneous to the JCPOA and to focus on the contours of the agreement that have been on the table for some time now," State Department spokesman Ned Price told reporters last Thursday.

But the prospects for reaching a deal with Iran are not good, he admitted.

And meanwhile, the "breakout time" for Iran obtaining nuclear weapons capability "can now be measured not in months, not in a year as it was upon the implementation of the JCPOA in January of 2016, but in weeks or potentially even less," Price said.

"So the options we have, there is no silver bullet."

Price said U.S. negotiators are "continuing to push" for a return to the nuclear deal, because "we continue to believe that it would be profoundly in America’s national interest if we were able to return to mutual compliance with the Iran deal, principally because it would require Iran to once again be limited by the strictest, the most intrusive inspections and monitoring regime ever negotiated and subject to the strict limits that the JCPOA places on Iran’s nuclear program.

"Now, it’s an open question if we can get there,” Price continued. “There’s a lot to suggest we won’t be able to.

“But we are and have been preparing equally for scenarios where there is a mutual return to compliance with the JCPOA and the scenario where there is not, and a scenario where we will continue to work closely with our partners and allies, but working with those same partners and allies, we will pursue a different approach that will nonetheless ensure that we’re able to live up to the commitment President Biden has made that Iran will never be able to acquire a nuclear weapon."

A reporter told Price, "We have seen lately an assassination of many Iranian scientists. That cannot be a coincidence. So do you think this is, like, part of a containment policy (by a U.S. ally)?

"I’m just not in a position to comment one way or the other on that," Price responded. "But we have a commitment – it’s a commitment we share with many of our allies and partners around the world – that Iran will never be able to acquire a nuclear weapon."

Price noted that Iran's nuclear program is not the only threat, although it is the main threat, to U.S. interests:

He mentioned Iran's "ballistic missile program, support for proxies, its support for terrorist groups, its exportation of instability throughout the region. All of these things are challenges, threats that we could address much more effectively were the challenge of a nuclear -- unconstrained Iranian nuclear program no longer on the table."

Former Secretary of State Mike Pompeo mentioned another potential threat from Iran, telling "Sunday Morning Futures" that Iran could "close down" the Strait of Hormuz, impeding a large portion of the world's oil shipments and driving energy prices higher.

"There is no doubt about the tenuous situation. That risk is very real," Pompeo said.