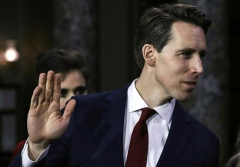 (CNSNews.com) - Sen. Josh Hawley (R-Mo.) is urging the United States to "build new coalitions of other free nations who are willing to partner and hold China accountable" for its behavior -- everything from its spying, technology-stealing, trade abuses and now its coverup of what became the coronavirus pandemic.

In mid-April, Hawley introduced the "Justice for Victims of Coronavirus Act," which would strip China of its sovereign immunity and allow American citizens and states to sue the Chinese government for coronavirus-related damages.

In return, the Chinese government is "considering punitive countermeasures” against US lawmakers, entities and state officials, including Hawley and the State of Missouri.

“The State of Missouri is actually suing the Chinese government, and rightly so, and I proposed legislation that would allow every American who has been hurt by this COVID pandemic that Beijing unleashed on the world -- to allow every American to go to court,who has been hurt, hold the Chinese government accountable and have the court freeze Chinese assets.

“So I guess that makes me a target. I don't care. We're going to keep speaking the truth, and we're going to hold China accountable, and this is the time. We have got to change our relationship with China. It is now or never.”

Democrats have taken a less urgent approach to China, in their zeal to blame Trump for his response to the coronavirus pandemic. So while Trump blames China, Democrats blame him.

“These are the arguments that I'm making, and it's time, right now it's time for elected officials to stand up and do something about it.”

Host Tucker Carlson asked Hawley if he's worried about China buying U.S. debt, which is sky-rocketing amid the pandemic response, giving China even greater control over the U.S. economy:

"Yes," Hawley said, "and this is one of the reasons why China needs to be forced to pay damages for what they've done. They're the ones who unleashed this on the world. Let's be clear, Beijing knew that they had a major health crisis on their hands in Wuhan, the origin of the virus. They silenced doctors, they gagged whistle-blowers. It allowed this thing to spread, and the spread to become the pandemic level, so they need to be forced to pay, Beijing does.

“But Tucker, beyond that, we've got to now build new coalitions of other free nations who are willing to partner together and hold China accountable. We cannot be satisfied and content with the status quo. “

The Global Times, an English-language Chinese newspaper, reported on May 14:

China is extremely dissatisfied with the abuse of litigation by the US against China over the COVID-19 epidemic, and is considering punitive countermeasures against US individuals, entities and state officials, such as Missouri's attorney general Eric Schmitt, who filed a lawsuit against China, seeking compensation for the coronavirus pandemic, sources close to the matter told the Global Times exclusively. At least four US Congress members, including Josh Hawley and Tom Cotton, and two entities will be put on China's sanctions list, analysts said.

China won't just strike back symbolically, but will impose countermeasures that will make them feel the pain, analysts said.

Some US lawmakers and state governors as well as attorneys who are also GOP hawks have filed lawsuits against China, alleging that the Chinese government mishandled the epidemic and it caused severe economic consequences in the US.

At least six lawsuits have been filed against China in US federal courts, while some lawmakers have also introduced bills to make it easier to sue China despite legal hurdles and no realistic possibility for US states to achieve their goal. Missouri became the first state in the US to sue the Chinese government. Missouri Attorney General Eric Schmitt filed a lawsuit on April 21, claiming that China did little to stop the spread of the virus and "lied to the world about the danger and contagious nature of COVID-19," claiming that Missouri residents may have suffered tens of billions of dollars in economic damage.

...Republicans who have been groundlessly accusing China and inflaming the "holding China accountable" political farce will face severe consequences, sources said, noting that the aftermath will also impact the upcoming November elections, while business and trade between Missouri and China will be further soured.