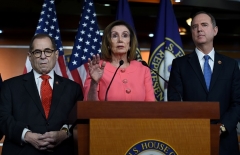 Two impeachments weren't enough for Democrats. Their select committee to examine the events of January 6 is another attempt to "get Trump," says Rep. Jim Jordan. (Photo by OLIVIER DOULIERY/AFP via Getty Images)

(CNSNews.com) - Rep. Jim Jordan (R-Ohio) says he saw "bits and pieces" of the emotional testimony on Monday by four police officers who tangled with Trump supporters at the U.S. Capitol on January 6.

The only people to blame for the violence on January 6 are those who engaged in it, Jordan told Fox News's Bret Baier. "They should be prosecuted, and they are being."

Jordan said the Democrats are avoiding the "fundamental" question, which is, "Why didn't the United States Capitol, the people's house, have an appropriate security posture on that day?"

"That's the information and testimony we need to get. That's what we should focus on," Jordan said:

Bennie Thompson, the chairman of this committee, said everything's on the table -- until we raised this issue about the Speaker's Office is the one who knows about the security posture and why it was the way it was.

Once we raised that question, they said, well, everything's on the table except that question. Again, that's why I think we were kicked off the committee, which I think underscores how political this thing actually is.

So they're going to focus on doing what they always do. Attack the former president.

Jordan noted that President Trump on January 6 told his supporters to march to the Capitol "peacefully and patriotically."

Jordan said he and other Republicans have been consistent in condemning all violent protests -- not just the one on January 6:

I have never downplayed January 6.

We have been consistent. The people who haven't are the Democrats. And that's why they continue to focus on this, because they can't talk about the fact that they defunded the police and all the things they said when they raised money to bail out rioters and looters from jail. They can't talk about those things.

So they're going to focus on this and attacking the former president.