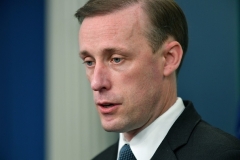 (CNSNews.com) - House Speaker Nancy Pelosi began her day in Malaysia, and if press reports are true, she may end it in Taiwan, despite threats from China to stay away.

National Security Director Jake Sullivan said on Tuesday that Pelosi makes her own travel decisions as the leader of an independent branch of government, and therefore he could not confirm Pelosi's anticipated visit to the sovereign nation that China claims as its own.

But he did warn China “not to escalate, not to take measures that would destabilize the relationship across the Taiwan Strait.”

"What I will say is that a Speaker of the House has traveled to Taiwan before. And members of Congress travel there all the time, including several who have already traveled there this year," Sullivan told NBC's "Today" show.

"So for China to try to turn what is in the historical norm into a crisis or try to use it as a pretext for aggressive action around Taiwan, that's on them. And they would be the ones who would be escalating.

"The United States has no interest in escalation. But we will, of course, continue to assert our right to help support Taiwan's self-defense, no matter what happens in the coming days."

Host Savannah Guthrie asked Sullivan, "What is your message to the Chinese leadership this morning?"

"Well, President Biden was clear in his call with president XI. I've been clear with my Chinese counterpart in the last few days and weeks," Sullivan said:

"Number one, the United States, our policy on Taiwan has not changed. So the ball is in China's court not to escalate, not to take measures that would destabilize the relationship across the Taiwan Strait.

"But of course the United States is going to do whatever is necessary to defend our interests, to protect our people and to ensure a free and open Indo- pacific. And we are going to continue that policy as we watch what China does in the coming days.

“But, again, Savannah, nobody has an interest in escalation in this situation. And China should think very carefully about that as they consider their next steps."

Sullivan said the White House provided Pelosi with military, intelligence and diplomatic briefings before she left for Asia, "where we laid out all of the factors at play here, including the risks," he said.

"So now, our responsibility, if she does choose to go forward and visit Taiwan, is to ensure that we're safeguarding America's national security interests. That's exactly what we intend to do."

"We are closely following the itinerary of Speaker Pelosi. A visit to Taiwan by her would constitute a gross interference in China’s internal affairs, seriously undermine China’s sovereignty and territorial integrity, wantonly trample on the one-China principle, greatly threaten peace and stability across the Taiwan Strait, severely undermine China-US relations and lead to a very serious situation and grave consequences.

"We want to once again make it clear to the US side that the Chinese side is fully prepared for any eventuality and that the People’s Liberation Army of China will never sit idly by, and we will make resolute response and take strong countermeasures to uphold China’s sovereignty and territorial integrity.

"What the US should do is to abide by the one-China principle and the stipulations of the three Sino-US joint communiqués, fulfill President Biden’s commitment of not supporting 'Taiwan independence' and not arrange for a visit by Speaker Pelosi to Taiwan."