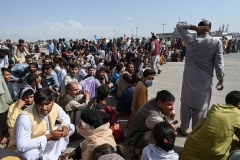 Afghans mob the Kabul airport on August 16, 2021, hoping for rescue after the fall of Aghanistan. (Photo by WAKIL KOHSAR/AFP via Getty Images)

(CNSNews.com) -  In his speech to the nation Monday afternoon, President Joe Biden called the images coming out of Kabul "gut-wrenching."  He said the United States would continue to "evacuate our Afghan allies and vulnerable Afghans to safety outside of Afghanistan."

Biden said the evacuation mission "will be short in time, limited in scope, and focused in its objectives. Get our people and our allies to safety as quickly as possible."

Later, H.R. McMaster, who served as National Security Advisor under President Donald Trump, said "there's a sense now that we can't do anything more" than evacuating around 30,000 Afghans.

"What about the rest of them, Jake?" McMaster asked CNN's Jake Tapper.

Where are the humanitarians in the Biden administration now?

There are tons of civilian flights, charter flights that have been donated. There are third countries that are willing to take Afghans, to take Afghan women and Afghan university students. And they're lined up, ready to go.

What -- if we give a damn about human rights, I mean, I can't believe that the president mentioned human rights in the speech at the same time as he was -- he was talking about the very narrowly circumscribed mission.

You know, Jake, as -- and as your reporter has said on the ground, you need safe quarters. You need areas that people can come to" (to await evacuation).

In his speech on Monday, Biden said, "I also want to acknowledge how painful this is to so many of us. The scenes we're seeing in Afghanistan, they're gut wrenching, particularly for veterans, our diplomats, humanitarian workers, for anyone who is spent time on the ground working to support the Afghan people."

Biden said it is "deeply, deeply personal" for him as well as for veterans and Gold Star families:

I've traveled there on four different occasions. I met with the people. I've spoken to the leaders. I spent time with our troops. And I came to understand firsthand what was and was not possible in Afghanistan. So now we're fercus--focused on what is possible. We will continue to support the Afghan people. We will lead with our diplomacy, our international influence, and our humanitarian aid.

We'll continue to push for regional diplomacy and engagement to prevent violence and instability. We'll continue to speak out for the basic rights of the Afghan people, of women and girls, just as we speak out all over the world.

I've been clear that human rights must be the center of our foreign policy, not the periphery. But the way to do it is not through endless military deployments. It's with our diplomacy, our economic tools, and rallying the world to join us.

McMaster was critical of Biden's decision to remove the small contingent of U.S. troops in Afghanistan, which McMaster called a "sustainable level of commitment."

"This 'end-the-endless-wars' mantra...you're talking about 3,500 troops or maybe 8,000 troops -- I mean, it really doesn't matter -- that were enabling the Afghans to bear the brunt of the fight."

McMaster, who quit the Trump administration, blamed three presidents -- Obama, Trump and Biden -- for making mistakes, then doubling down on their predecessors' mistakes:

"I think it should come as no surprise that the vast majority of Americans don't support the war, because three presidents in a row have told them it's not worth it, right?

"And I would say, across the last three administrations, the American people haven't heard that from their leadership."