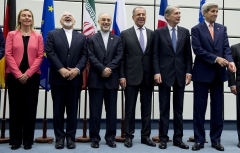 Secretary of State John Kerry, Iranian Foreign Minister Javad Zarif, and Russian, British and E.U. counterparts in Vienna on July 14, 2015, the day the JCPOA was finalized. (Photo by Joe Klamar/AFP via Getty Images)

"Yes, it would be a really big mistake, Bret, to try to turn the clock back to 2016 and resurrect the Iran nuclear deal," McMaster told Fox News's Bret Baier on Wednesday night:

The Iran nuclear deal was a political disaster masquerading as a diplomatic triumph. It was a fundamentally flawed agreement, but what it didn't do, and it didn't -- it didn't consider really two fundamental issues that we have to take into consideration when you're dealing with Iran.

First of all, the hostile ideology of the regime, the ideology of the revolution, and, secondly, this four-decade-long proxy war against us, and the big payoffs to Iran, when the deal was signed, as well as the relief of sanctions.

What did they do with that money? They applied that money to intensifying the sectarian violence across the region, in an effort really to put a proxy army on the border of Israel.

McMaster noted that Israel will not accept the threat of a hostile state with nuclear weapons, and he said "it's a possibility" that Israel might move against Iran before Trump leaves office:

"In some ways, Bret, we are back to kind of the 2006 period, when we knew that Iran was pursuing this threshold nuclear weapons capability, and tensions were higher, and the IDF (Israeli Defense Force) was about to act at that point.

"This is, I think, one of the reasons, because of the increasing tension, that Iran said, oh, yes, I'd like to negotiate now, because the sanctions against Iran were starting to bite against them, and the Israeli Defense Force, I think, was considering action."

Our enemies, adversaries, rivals think it might be time to act out against us. So I think it's really important for us to show a high degree of competence and a degree of stability, and a recognition that, hey, our democracy works, our institutions are strong.

And I think that, if we show weakness and division, of course, there are a lot of malign actors who want to take advantage of that, from the Chinese Communist Party, to Vladimir Putin, to jihadist terrorists, to North Korea.

And you mentioned at the outset here Iran, which is enriching uranium and also continuing its four-decade-long proxy war against us and Israel and the Arab monarchies and the world, really.

McMaster said a "smooth transition' would benefit "all Americans" and "make sure that our adversaries don't see some kind of vulnerability that they can take advantage of."

McMaster also said he thinks members of the Trump administration do want a smooth transition. "And we ought to, I think, have confidence in that. And I hope the president rises to the occasion too. And you're right, Bret. Hey, it is fine to challenge these outcomes. We have a judicial process. Let that process work.

"What bothers me, though, Bret, is the -- kind of this discussion about fraud and problems in the sanctity -- protecting the sanctity of our election.”

President Trump withdrew the U.S. from the Iran nuclear deal in May 2018, calling it "one of the worst and most one-sided transactions the United States has ever entered into."

Biden, in a September 2020 op-ed, wrote: "If Iran returns to strict compliance with the nuclear deal, the United States would rejoin the agreement as a starting point for follow-on negotiations. With our allies, we will work to strengthen and extend the nuclear deal's provisions, while also addressing other issues of concern.”