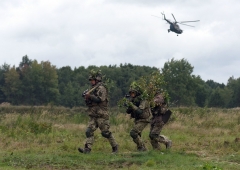 Ukrainian servicemen take part in joint military exercises with the United States and other NATO countries on September 24, 2021, as tensions escalate with Russia. (Photo by YURIY DYACHYSHYN/AFP via Getty Images)

(CNSNews.com) - Secretary of State Antony Blinken delivered a stern message to Russian Foreign Minister Sergey Lavrov when the two men met in Sweden on Thursday, but the question remains -- does Russia care what the Biden administration says?

Blinken said the United States and its allies are "deeply concerned" by Russia's "significant aggressive moves against Ukraine," including the Russian troop buildup on Ukraine's border:

"It’s now on Russia to de-escalate the current tensions by reversing the recent troop buildup, returning forces to normal peacetime positions, and refraining from further intimidation and attempts to destabilize Ukraine," Blinken said in Stockholm. "We’re watching the situation very closely. We’re in close contact and coordination with our allies."

Blinken noted, "We’ve seen this playbook before in 2014, when Russia last invaded Ukraine. Despite uncertainty about intentions and timing, we must and we will prepare for all contingencies, while working to see to it that Russia reverses course."

"My worry is an invasion, the size of which we hadn't seen since World War II," Rep. Michael McCaul (R-Texas), the ranking member of the House Foreign Affairs Committee, told Fox News on Thursday.

They (Russia) are very determined, very serious about this. There are about 100,000 Russian troops on the Ukraine border as I speak, with many more on their way from Moscow.

And you have to ask the question, what provoked this? I would go back to Afghanistan and the showing of weakness by the unconditional surrender to the Taliban. This has provoked not only Mr. Putin, but also President Xi and China, as they look at imperial China and Taiwan and the islands in the South China Sea.

This is all happening in real time. And it's happening very quickly after the fall of Afghanistan.

McCaul said Russian President Vladimir Putin has always wanted to reclaim Ukraine as part of his plan to restore the old Soviet empire:

And Ukraine was the breadbasket of Russia. So this has been on their plate for quite some time. They have always wanted to take it back. And I think they're making a calculation that this president (Biden) is exhibiting weakness, and that he's not going to -- he's not going to respond.

So I think it's important for the administration to show deterrence here and for our NATO allies to show -- demonstrate to Putin, this will come at a high price if you do this. If they can move in, like China did in Hong Kong, they will do it.

Blinken said on Thursday he made it "very clear" to Lavrov that the United States will "hold Russia responsible for its actions, including our commitment to work with European allies to impose severe costs and consequences on Russia if it takes further aggressive action against Ukraine."

Blinken stressed diplomacy, saying the U.S. is prepared to work with both Ukraine and Russia "to support a diplomatic resolution through implementation of the Minsk agreements in any way that we can. That diplomatic way forward can avert a crisis that would serve no one’s interests.

"Foreign Minister Lavrov and I had candid exchanges on our different perspectives.  We agreed to report those back to our presidents, who may have the opportunity to speak directly in the near future.""

No phone call between Putin and Biden has been announced so far.

McCaul stopped short of predicting a U.S. military response to a Russian invasion of Ukraine, saying that "sanctions will be extremely important and, I think, effective."

I do think it's important that NATO and our allies have a presence in Ukraine as this threat plays out. But, remember, this is the same president and administration who, when Congress put mandatory sanctions on Nord Stream 2 pipeline that will go from Russia into Europe, President Biden waived those sanctions in the national interests.

I don't know how that's in the national security interests of the United States to allow Putin to complete his pipeline into Russia, making Europe dependent on Russian oil and gas. In fact, in the national defense authorization debate going on right now, I passed an amendment to take away that presidential waiver.

And that is sitting down in the Senate. And this has been Secretary Blinken's number one job right now is to get my amendment stripped out the national defense authorization.

I don't understand this foreign policy that emboldens our adversaries like Mr. Putin. I think he sees that as weakness. And the only reason they did it is because they had a summit with Putin, and they wanted to make him happy in this discussion.

Ukraine is not a member of NATO.