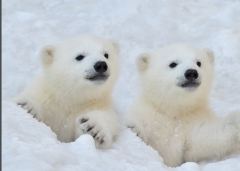 (CNS News) – Although the International Union for Conservation of Nature (IUCN) contends that melting sea ice, caused by global warming, is causing the polar bear population to decrease, a new report by evolutionary biologist Dr. Susan Crockford reveals that the global population of polar bears is “now almost 30,000 – up from 26,000 in 2015.”

In the Feb. 27 report, Crockford “clarifies that the IUCN’s 2015 Red List assessment for polar bears, which Facebook uses as an authority for ‘fact checking’, is seriously out of date,” according to a statement from the Global Warming Policy Foundation in London. “New and compelling evidence shows that bears in regions with profound summer ice loss are doing well.”

“This is only a slight-to-moderate increase, but it is far from the precipitous decline polar bear experts expected given a drop of almost 50% in sea-ice levels since 1979,” says Crawford. “This indicates summer sea-ice levels are not as critical to polar bear survival as USGS biologists assumed.Despite 2020 having had the second lowest September ice extent since 1979 (after 2012), there were no reports from anywhere around the Arctic that would suggest polar bears were suffering as a result: no starving bears, no drowning bears, and no marked increases in bear conflicts with humans.”

“Indeed, contrary to expectations, several studies have shown that polar bears in many regions have been doing better with less summer ice, either because multiyear ice has been replaced with more productive seasonal ice, or because the increased primary productivity that has come with longer open-water seasons has been a net benefit,” claims Crawford.

In related findings, “In 2020, Russian authorities announced the first-ever aerial surveys of all four polar bear subpopulations (Chukchi, Laptev, Kara, and Barents Seas), to be undertaken between 2021 and 2023,” reads the report.

Also, “[c]ontrary to expectations, a new study has shown that polar bear females in the Svalbard area of the Barents Sea were in better condition (i.e. fatter) in 2015 than they had been in the 1990s and early 2000s, despite contending with the greatest decline in sea ice habitat of all Arctic regions,” states the report.

“Polar bears continue to be described as ‘canaries in the coal mine’ for the effects of human-caused climate change, but the evidence shows they are far from being a highly-sensitive indicator species,” said the Global Warming Policy Foundation.  “It’s not a myth: 2020 appears to have been another good year for polar bears.”

Dr. Susan Crockford, Ph.D., is a zoologist who has written five books on polar bears and climate change. She also runs the blog site Polar Bear Science, Past and Present and the company Pacific IDentifications Inc.