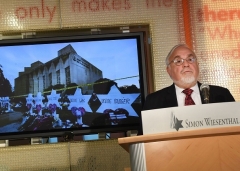 (CNSNews.com) – The Simon Wiesenthal Center on Tuesday slammed a Jewish Democratic organization for a campaign advert juxtaposing footage of President Trump with images from the Nazi era, calling the move “beneath contempt” and urging the group to withdraw the ad.

Criticism of the new Jewish Democratic Council of America’s ad has also come from the Republican Jewish Coalition and the American Jewish Committee, both of which called on the JDCA to take it down, while the Anti-Defamation League called it “deeply offensive.”

The ad, released on the eve of the first presidential debate between Trump and Joe Biden, shows imagery from Nazi Germany and 21st century America, comparing swastika-waving Germans with what appear to be “Unite the Right” rally participants in Charlottesville in 2017, before juxtaposing footage of Trump speaking with Nazi-era images, including Germans giving the “Sieg Heil” salute at a Nazi rally, and anti-Jewish graffiti on a Jewish-owned business.

“History shows us what happens when leaders use hatred and nationalism to divide their people,” the narrator says in part. “Hate doesn’t stop itself, it must be stopped.”

The SWC denounced the ad.

“Comparing the president of the United States to Hitler and Goebbels is beneath contempt,” said the group’s associate dean and global social action director, Rabbi Abraham Cooper. “That a Jewish group produced [it] compounds the offense. For 75 years Jews have emphasized the uniqueness of the Nazi savagery, racism, and genocide that mass murdered a third of our people and led tens of millions dead during WWII.”

Cooper said Trump and Biden were both “fair game for loud and sustained criticism on their policies, language, and style.”

“But invoking of Nazi imagery not only slanders the victims of the Nazis, the candidate, but the tens of millions of Americans who support him,” he said. “In 2020, anti-Semitism from the far right, far-left, and Islamists remains a real threat to American Jews. We need to demand of our candidates accountability on how they will combat it from all quarters.”

The SWC is an international human rights group that monitors anti-Semitism worldwide. It is named for Simon Wiesenthal, an Austrian Holocaust survivor who dedicated his life after the war to tracking down fugitive Nazi war criminals.

Promoting her group’s new ad, JDCA executive director Halie Soifer tweeted, “Those who say ‘it couldn't happen here’ aren’t paying attention. Trump has eroded the integrity of our democratic institutions, and continues to use hatred to further his political agenda. VOTE. Our future depends on it.”

The JDCA is targeting Jewish voters in swing states including Florida, Michigan and Pennsylvania with the ad, which it touts as “for the first time explicitly making the connection between the emboldening of white nationalism under Donald Trump and the rise of fascism and hatred in 1930s Germany.”

“Every time someone compares their opponent to a Nazi, it only diminishes the seriousness of Nazism,” said RJC spokesman Neil Boylan Strauss in an email. “The repeated accusations that President Trump is a Nazi don’t make more people hate him; it makes the Holocaust seem less awful. Diminishing the Holocaust and demeaning the memories of the six millions Jews killed by the Nazis is out of bounds for rational political discourse. The Democrats have fallen far below that standard with their new ad. They owe a retraction and an apology to the American Jewish community they pretend to represent.”

The RJC saw the JDCA as resorting to an ad designed to “divide and anger the Jewish community” because on substantive issues important to Jewish voters, the Democrats were losing support.

“JDCA couldn’t find a substantive ad message to win back the Jewish voters that they are losing in droves,” Strauss said. “Instead, they released a shocking attack ad meant to divide and anger the Jewish community. Democrats can’t talk about the disastrous Iran nuclear deal, because their own recent polling told them it isn’t popular with Jews. They can't talk about the president’s record on Israel, because they know while Biden failed for four plus decades, Trump delivered wins.”

The American Jewish Committee also slammed the ad: “The problem of antisemitism in the U.S. is grave. Offensive comparisons between 2020 America and 1930's Germany distract from the urgent need to fight Jew-hatred. They also trivialize the memories of both victims and survivors. [JDCA], take down this ad immediately.”

Anti-Defamation League CEO Jonathan Greenblatt said on Twitter the JDCA video was “the latest in growing references to Hitler, Goebbels or other Nazi leaders. This has no place in the presidential race and is deeply offensive to the memories of 6M+ Jews systematically exterminated during the Shoah.”

“We have said this many times before, and we will say it emphatically again: the hate + extremism in this race is alarming and should be repudiated unambiguously. Elected leaders who engage in lying, scapegoating, and routinely call for violence should be condemned, full stop. At the same time, we urge leaders & their surrogates to refrain from invoking the Holocaust in the context of the current election. It is not the same. Stay focused on the issues.”

The JDCA has not responded to emailed queries about the criticism. But in a video interaction with Holocaust historian Deborah Lipstadt, Soifer drew a distinction between “Holocaust imagery” and “Nazi era imagery,” saying the ad used the latter but not the former. Lipstadt agreed that the images used in the video focused on Nazi propaganda, and said if the ad had contained Holocaust images, she would not be taking part in the call with the JDCA.