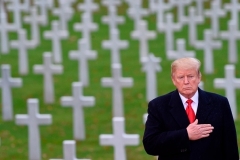 President Trump pays tribute to fallen American military personnel at the American Cemetery of Suresnes, outside Paris, on November 11, 2018. (Photo by Saul Loeb/AFP via Getty Images)

(CNSNews.com) – President Trump on Thursday night hit back at an article alleging that he called fallen American soldiers “losers” and “suckers,” saying the magazine’s anonymous sources – if they “really exist” – were “low-lives” and “liars.”

Those behind the article in The Atlantic, he charged, were trying to “influence a presidential election” which, he said, “we’re going to win, and they’re going crazy.”

Speaking at Joint Base Andrews after returning from a campaign event in western Pennsylvania, Trump called the article “a disgrace.”

“And I would be willing to swear on anything that I never said that about our fallen heroes. There is nobody that respects them more.”

“So I just think it’s a horrible, horrible thing,” Trump said of the article in what he called a “never-Trumper magazine,” adding that a great evening had been turned into “frankly a very sad evening, when I see a statement like that.”

The article by editor-in-chief Jeffrey Goldberg outlines a number of incidents portraying the president as someone with deeply disparaging views of fallen soldiers.

In November 2018, Trump visited France for ceremonies marking the 100th anniversary of the end of World War I.

A planned visit on November 10 to the Aisne-Marne American cemetery about 60 miles northeast of Paris was canceled at short notice, after Trump said the Secret Service would not approve a helicopter flight because of poor weather and near-zero visibility.

Trump did attend a ceremony the following day – the actual anniversary – at the Suresnes American Cemetery just outside Paris, where he honored more than 1,500 U.S. service personnel buried there.

“Each of these marble crosses and Stars of David marks the life of an American warrior – great, great warriors they are – who gave everything for family, country, God, and freedom,” he said at Suresnes.

“Through rain, hail, snow, mud, poisonous gas, bullets and mortar, they held the line, and pushed onward to victory – it was a great, great victory; costly victory but a great victory – never knowing if they would ever again see their families or ever again hold their loved ones.”

The unnamed sources cited in the article said Trump had not wanted to go to Aisne-Marne “because he feared his hair would become disheveled in the rain, and because he did not believe it important to honor American war dead.”

“Why should I go to that cemetery?” Trump was quoted as having said. “It’s filled with losers.”

Trump told reporters at Joint Base Andrews the Secret Service “wouldn’t let me go [to Aisne-Marne], no matter what happened, because of security, because of safety.”

He recalled expressing his frustration at the time to First Lady Melania Trump about the fact he could not make the trip.

“I spoke to my wife, I said, I hate this, I came here [to France] to go to that ceremony, and to the one that was the following day, which I did go to [at Suresnes]. I said I feel terribly. And that was the end of it.”

“It’s a disgrace that a magazine is able to write it.”

The article also claimed that when Sen. John McCain (R-Ariz.) died in 2018, Trump had said “We’re not going to support that loser’s funeral” and reacted badly when he saw flags lowered to half-staff to honor the Vietnam War veteran.

Trump on Thursday night tweeted in reaction to that part of the article:

I was never a big fan of John McCain, disagreed with him on many things including ridiculous endless wars and the lack of success he had in dealing with the VA and our great Vets, but the lowering of our Nations American Flags, and the first class funeral he was given by our Country, had to be approved by me, as President, & I did so without hesitation or complaint.

Quite the contrary, I felt it was well deserved. I even sent Air Force One to bring his body, in casket, from Arizona to Washington. It was my honor to do so. Also, I never called John a loser and swear on whatever, or whoever, I was asked to swear on, that I never called our great fallen soldiers anything other than HEROES. This is more made up Fake News given by disgusting & jealous failures in a disgraceful attempt to influence the 2020 Election!

Several White House officials came out in support of Trump, rejecting the claims in the article and its depiction of the president.

“I see President @realDonaldTrump consistently express his heartfelt gratitude and absolute admiration for our brave men and women in uniform. Just yesterday, he was truly humbled to be in the presence of our courageous World War II veterans,” tweeted press secretary Kayleigh McEnany. “This Atlantic story is garbage!”

“I was actually there and one of the people part of the discussion – this never happened. I have sat in the room when our President called family members after their sons were killed in action and it was heart-wrenching,” she tweeted.

“These were some of the moments I witnessed the President show his heart and demonstrate how much he respects the selfless and courageous men and women of our military. I am disgusted by this false attack.”

“I’ve been by the President’s side. He has always shown the highest respect to our active duty troops and veterans with utmost respect paid to those who have given the ultimate sacrifice and those wounded in battle,” he said.

Democratic presidential nominee Joe Biden said in a statement that if the “revelations” were true, “they are yet another marker of how deeply President Trump and I disagree about the role of the President of the United States.”

“I have long said that, as a nation, we have many obligations, but we only have one truly sacred obligation – to prepare and equip those we send into harm’s way, and to care for them and their families, both while they are deployed and after they return home,” he said.