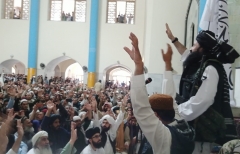 (CNSNews.com) – The Taliban’s signed commitment with the U.S. “not to cooperate with groups or individuals threatening the security of the United States and its allies” is being put to the test with the return to Kabul of senior members of a U.S.-designated foreign terrorist organization whose track record includes the deadliest attack sustained by the CIA in 26 years.

Khalil Ahmed Haqqani, a senior member of the Haqqani network, made an appearance at Kabul’s biggest mosque on Friday, after holding talks with the chairman of the high council for national reconciliation council, Abdullah Abdullah, and former President Hamid Karzai.

According to Abdullah, Khalil Ahmed Haqqani gave assurances that “they will work hard to provide the right security for the citizens of Kabul.”

The man giving those assurances is a leader in arguably the most lethal terrorist group operating in Afghanistan. The Haqqani Network (HQN) is commonly described as a Taliban faction, but effectively also acts as a bridge between the Taliban and al-Qaeda.

Like al-Qaeda, the HQN is listed by the U.S. government as a foreign terrorist organization, while the Taliban itself is not.

The distinction has always been questionable, given the intertwining of HQN and the Taliban. HQN leader Sirajuddin Haqqani (Khalil Ahmed Haqqani’s nephew) is one of the Taliban’s two deputy “emirs.”

Another Haqqani, Yahya (Sirajuddin Haqqani’s brother-in-law) has been the key liaison between HQN and al-Qaeda since 2009, according to the U.S. government.

“In this role, Yahya has provided money to al-Qaeda members in the region for their personal expenses. As of mid-2009, he acted as the Haqqani Network’s primary liaison with foreign fighters, including Arabs, Uzbeks, and Chechens,” the State Department says.

Haqqani leaders are listed as specially designated global terrorists, and have U.S. rewards on their heads ($10 million in Sirajuddin’s case, $5 million in the cases of Khalil and Yahya).

Other top HQN figures wanted by the U.S. ($5 million rewards offered) are Aziz Haqqani, Sirajuddin’s brother, described as the network’s “primary conduit for operations in Kabul and high profile attacks throughout the country”; and Abdul Rauf Zakir, described as the HQN’s “chief of suicide operations.”

“The Haqqani Network is allied with the Afghan Taliban and al-Qaeda and seeks to reestablish Taliban rule in Afghanistan,” according to the State Department. “The Haqqanis are considered the most lethal insurgent group targeting Coalition and Afghan forces in Afghanistan.”

As recently as last January, the U.S. Treasury Department in an assessment for the Pentagon’s lead inspector general said senior HQN figures “have discussed forming a new joint unit of armed fighters in cooperation with and funded by al-Qaeda.”

With a stronghold in Pakistan’s North Waziristan straddling the Afghan border, the HQN has longstanding links to Pakistan’s ISI military intelligence agency. Then-Joint Chiefs of Staff Chairman Adm. Mike Mullen told a Senate committee in 2011 that the HQN was a “veritable arm” of the ISI. Pakistan regularly denies the allegations.

Attacks attributed to the HQN include a Dec. 30, 2009 suicide bombing suicide bombing that killed seven CIA employees at Camp Chapman in Khost. It was the biggest loss of life suffered by the agency in a single incident since 1983, when eight CIA personnel were among 17 Americans and dozens of others killed when Hezbollah bombed the U.S. Embassy in Beirut.

Other major attacks in Afghanistan which the U.S. holds the HQN responsible for include the 2008 bombing of the Indian Embassy in Kabul; a 2010 suicide bombing in Kabul that killed five American soldiers, one Canadian soldier and 12 Afghan civilians; a 2011 bomb attack on a NATO outpost that killed five Afghans and injured 77 U.S. soldiers; and a 19-hour assault on the U.S. Embassy in 2011, which killed 16 Afghans, including at least six children.

The HQN also attacked the Intercontinental Hotel in Kabul in 2011, killing 11 civilians and two Afghan policemen; killed two U.S. soldiers and wounded more than 100 in a 2012 suicide bomb attack against a forward operating base in Khost province; and carried out a 12-hour siege of a lakeside hotel near Kabul in 2012, which cost at least 18 Afghan lives.

In the Doha agreement, the Taliban pledged that it would “not allow any of its members, other individuals or groups, including al-Qaeda, to use the soil of Afghanistan to threaten the security of the United States and its allies.”