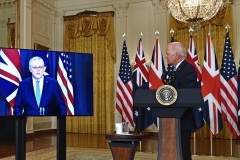 At the White House, Biden joined Morrison and Johnson by videolink as the three announced the formation of “AUKUS” – the Australia, United Kingdom, and United States partnership.

None of the three mentioned the word “China” but the initiative is clearly designed to counter an increasingly assertive China, whose expanding People’s Liberation Army Navy is bolstering Beijing’s claims in the South China Sea and making probing deployments deep into the Pacific.

“Our world is becoming more complex, especially here in our region, the Indo-Pacific,” Morrison said.  “This affects us all. The future of the Indo-Pacific will impact all our futures.”

Morrison described AUKUS as “a new enhanced trilateral security partnership” that “seeks to engage, not to exclude; to contribute not take; and to enable and empower, not to control or coerce.”

“We need to be able to address both the current strategic environment in the region and how it may evolve,” Biden said. “Because the future of each of our nations and indeed the world depends on a free and open Indo-Pacific, enduring and flourishing in the decades ahead.”

“This initiative is about making sure that each of us has a modern capability, the most modern capabilities we need, to maneuver and defend against rapidly evolving threats.”

There was no early response from China’s foreign ministry in Beijing, but its embassy in Washington accused the three countries of displaying a “Cold War mentality and ideological prejudice.”

The White House said in a statement that a 18-month effort would now begin “to seek an optimal pathway to deliver this capability.”

“We will leverage expertise from the United States and the United Kingdom, building on the two countries’ submarine programs to bring an Australian capability into service at the earliest achievable date.”

Trilateral collaboration under AUKUS will also seek to enhance joint capabilities and interoperability in other areas, initially to include “cyber capabilities, artificial intelligence, quantum technologies, and additional undersea capabilities.”

The three leaders stressed that the aim is to develop nuclear-powered – not nuclear-armed – submarines.

Only six nations today operate nuclear-powered submarines – the United States, Britain, Russia, China, France, and India – while Brazil has a program underway and South Korea is reportedly eyeing one.

Unlike conventionally fueled submarines, nuclear powered boats are faster, can operate underwater for far longer periods of time, not needing to surface frequently.

The U.S. Navy has 70 commissioned nuclear powered submarines (including both attack subs and nuclear-armed SSBNs).

According to unclassified Office of Naval Intelligence data cited in a Congressional Research Service report, China in 2020 had 11 commissioned nuclear-powered submarines (four of them nuclear armed SSBNs), and is projected to have 16 (six of them SSBNs) in 2025, 22 (including eight SSBNs) in 2030, and 26 (including 10 SSBNs) by 2040.