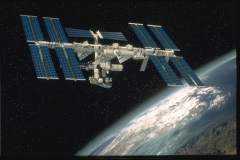 (CNSNews.com) – Just five days after the International Space Station was forced to maneuver to dodge orbiting debris originating from Beijing’s controversial 2007 shootdown of a Chinese weather satellite, Russia on Monday destroyed a satellite of its own, adding more than 1,500 pieces of “trackable” debris into space.

The United States slammed Russia over the use of an anti-satellite (ASAT) missile to destroy a defunct Soviet-era spy satellite, calling it “dangerous and irresponsible” and pointing out that the resulting debris will be littering space for years to come.

The Russian action forced the crew of the ISS – two Russians, four Americans, and a German – to again take precautionary evasive measures, this time sheltering in the capsules that ferry astronauts to the station – Russia’s Soyuz MS-19 and the SpaceX capsule Crew Dragon.

In a tweet, the Russian space agency Roscosmos suggested the fuss was overblown, saying the crew had taken to the capsules “according to standard procedures,” and that the “object” that forced the action had “moved away from the ISS orbit.”

“Friends, everything is regular with us!” tweeted the ISS’ Russian commander, Anton Shkaplerov. “We continue to work according to the program.”

But the commander of U.S. Space Command, U.S. Army Gen. James Dickinson, said Russia through its satellite shootdown had “demonstrated a deliberate disregard for the security, safety, stability, and long-term sustainability of the space domain for all nations.”

“The debris created by Russia’s DA-ASAT [direct-ascent anti-satellite missile] will continue to pose a threat to activities in outer space for years to come, putting satellites and space missions at risk, as well as forcing more collision avoidance maneuvers,” he said. “Space activities underpin our way of life and this kind of behavior is simply irresponsible.”

Secretary of State Antony Blinken also weighed in, saying the incident clearly demonstrated “that Russia, despite its claims of opposing the weaponization of outer space, is willing to jeopardize the long-term sustainability of outer space and imperil the exploration and use of outer space by all nations through its reckless and irresponsible behavior.”

“The United States will work with our allies and partners as we seek to respond to this irresponsible act.”

Blinken was alluding to a push by Russia (and China) for more than a decade for a Treaty on the Prevention of the Placement of Weapons in Outer Space (PPWT). The U.S. opposes the initiative, arguing that, given the dual-use nature of many space technologies, defining a “weapon” in space would be problematic. Verifying compliance effectively would also be difficult, it says.

At the same time as they have been pursuing the PPWT, however, China and Russia have both been developing and deploying weapons that the U.S. contends are actually threatening objects in space.

“Russia is developing a diverse suite of ground-launched and directed-energy [i.e. laser] ASAT capabilities,” according to an unclassified 2019 Pentagon missile defense review.

According to NASA, around 23,000 pieces of trackable debris larger than a softball are orbiting the Earth, at speeds fast enough to damage a spacecraft or satellite. (There are many, many more pieces of “space junk” too small to track and catalogue.)

According to a 2019 Defense Intelligence Agency report on “challenges to security in space,” debris can remain in space for anywhere from a few years for objects orbiting at below 600 kilometers (373 miles) to longer than a century in the case of objects in higher orbits.

It said that between 1998 and 2017, the ISS had to maneuver at least 25 times to avoid poten­tial collisions with orbiting objects.

“Russia is developing and deploying capabilities to actively deny access to and use of  space by the United States and its allies and partners,” Dickinson said.

Russia, China, the U.S. and India are the only countries with the proven ability to destroy satellites from the ground.