US is ‘Satan,’ Israel is its ‘Chained Dog,’ But Twitter Gives Ayatollah’s Tweets a Pass 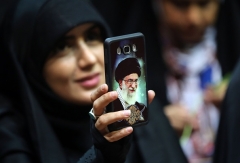 An image of supreme leader Ayatollah Ali Khamenei on an Iranian woman’s phone. (Photo by -/AFP via Getty Images)

(CNSNews.com) – Iran’s supreme leader, in a tweet Wednesday that was not flagged, restricted, or blocked by Twitter, called the United States “Satan” and labeled Israel America’s “chained dog,” drawing fresh attention to questions about the platform’s content policies.

“Today more than ever, the interest of the Islamic Nation lies in unity, the type of unity that creates power against enemies and shouts out loudly at the embodied Satan, the encroaching US, and its chained dog, the Zionist regime, and stands up against aggression,” Ayatollah Ali Khamenei tweeted on his English-language feed.

The tweet was a paraphrased excerpt of a speech he gave marking the annual Hajj season.

(In the speech itself, he called for an Islamic unity “that can let out a thunderous cry at the embodiment of Satan – transgressing America – and at its mad dog, the Zionist regime.” He also threatened “bitter consequences” for Muslim politicians who condone Israel’s “survival.”)

The tweet was posted on the same day as a Twitter representative told an Israeli parliamentary committee, in relation to provocative tweets by Khamenei, that “comments on political issues” and “foreign policy saber-rattling” do not generally violate Twitter’s rules.

Ylwa Pettersson was responding to a question about why the platform allows Khamenei’s tweets while it has been restricting some of President Trump’s.

“You’ve recently started flagging the tweets of President Trump,” said human rights attorney Arsen Ostrovsky, taking part in the hearing. “Why have you not flagged the tweets of Iran’s Ayatollah Khamenei, who has literally called for the genocide of Israel and the Jewish people?”

Speaking via video link, Pettersson replied: “We have an approach to world leaders that presently say[s] that direct interactions with fellow public figures, comments on political issues of the day, or foreign policy saber-rattling on military, economic issues are generally not in violation of our Twitter rules.”

Lawmaker Michal Cotler-Wunsh, chairing the discussion, interrupted, “Calling for genocide on Twitter is okay, but commenting on the political situations in certain countries is not okay?”

Pettersson did not answer the question directly, but said, “If a world leader violates our rules but [there] is a clear interest in keeping that up on the service we may place it behind a notice that provides some more context about the violation, and allows people to click through if they wish to see that type of content.”

She said that was what happened with Trump’s tweet last May, in which he said – in the context of rioting in Minneapolis – “when the looting starts, the shooting starts.” Twitter at the time limited the tweet’s visibility.

“That tweet was violating our policies regarding the glorification of violence based on the historical context of – of the last line of that tweet, and the risk that it could possibly inspire harm, and similar actions,” Pettersson said.

She said Twitter had put Trump’s post behind a warning notice, but did not remove it, “so that the citizens can see what their political figures are commenting [on] and hold them accountable for what they’re saying online.”

Cotler-Wunsh urged Twitter and other social media platforms to ensure that “there is no double standard.”

Khamenei has 798,000 followers on his official English-language Twitter account, up from just over half a million last November.

He’s not the only regime leader to use Twitter actively even though it’s banned for ordinary Iranians. President Hassan Rouhani’s English and Farsi accounts have more than 1.9 million followers combined, and Foreign Minister Javad Zarif’s English account has 1.5 million followers.

A group of GOP senators earlier this year urged Twitter to stop providing a platform for Khamenei and Zarif, noting both had been sanctioned by the Trump administration.

Wednesday’s hearing at the Knesset heard that a monitoring division in the Diaspora Affairs Ministry had found around 200,000 anti-Semitic posts on Twitter in the past two months.

World Zionist Organization vice-chairman Yaakov Hagoel told the panel that social media networks have improved in their response to anti-Semitism online, but needed to do more.

He said anti-Muslim or anti-LGBT posts tended to be taken down quickly, but that when it comes to anti-Semitic posts, “they dodge, ignore and drag their feet.”