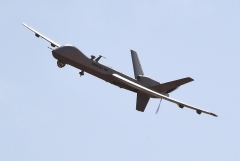 (CNSNews.com) – For the second time in two days, the U.S. military on Sunday carried out an unmanned airstrike targeting suspected ISIS-K terrorists, destroying a vehicle in Kabul which it said posed an imminent threat to the Kabul airport where the U.S.-led evacuation mission is drawing to a close.

“We are confident we successfully hit the target,” U.S. Central Command spokesman U.S. Navy Capt. Bill Urban said in a statement. “Secondary explosions from the vehicle indicated the presence of a substantial amount of explosive material.”

“We are assessing the possibilities of civilian casualties, though we have no indications at this time,” he said. “We remain vigilant for potential future threats.”

Hours later, Urban in an updated statement said the military was aware of reports of civilian casualties, suggesting they may have resulted from the secondary explosions, rather than the initial strike on the vehicle.

“We are still assessing the results of this strike, which we know disrupted an imminent ISIS-K threat to the airport,” he said. “We know that there were substantial and powerful subsequent explosions resulting from the destruction of the vehicle, indicating a large amount of explosive material inside that may have caused additional casualties.”

“It is unclear what may have happened, and we are investigating further,” Urban said. “We would be deeply saddened by any potential loss of innocent life.”

The Associated Press cited “an Afghan official” as saying three children had been killed.

A suicide bomb and gunfire attack at the airport on Thursday, claimed by the ISIS affiliate known as ISIS-K, killed 13 U.S. military personnel, along with scores of Afghans waiting at the airport in the hope in getting a flight out before the August 31 deadline for the evacuation operation to end.

Before Sunday’s airstrike the U.S. Embassy, which is operating from the airport complex, had issued another urgent warning to U.S. citizens to leave or stay away from the various entrances to the airport, citing a “specific, credible threat.”

Suicide vehicle bombings have long been a characteristic of Islamist terrorism. In Afghanistan, “vehicle-borne improvised explosive devices” (VBIEDs) have accounted for significant loss of life among Afghans and U.S. and coalition military personnel, carried out by the Taliban, the Taliban faction known as the Haqqani Network, and in more recent years by ISIS-K.

Sunday’s strike came two days after the U.S. military in an unmanned airstrike killed two individuals described by the Pentagon as an ISIS-K “planner” and an ISIS-K “facilitator” in Nangarhar province, a traditional ISIS-K stronghold.

Both strikes were “over-the-horizon” operations, meaning they were launched by U.S. forces based outside of Afghanistan.

Taliban fighters patrol a street in Kabul on Sunday. (Photo by Aamir Qureshi/AFP via Getty Images)

The drone strikes in Nangahar province and Kabul come two weeks after the Taliban seized control of the capital as the drawdown of U.S. and coalition forces after a 20-year war neared its end.

As thousands of foreign citizens and Afghans scrambled to leave Afghanistan from its only operating international airport President Biden sent in thousands of additional troops to enable a massive evacuation effort that has seen more than 114,000 people flown out of the country as of Sunday – two days before the mission is scheduled to end.

A senior Taliban official, Abdulhaq Wasiq, condemned the U.S. military action, calling it a violation of the Doha agreement signed between the Taliban and U.S. government in February 2020.

“We have signed an agreement with Americans in Doha regarding this and the attack is against the agreement,” the Tolo news agency quoted Wasiq as saying, in reference to the Nangahar airstrike. “Based on the agreement, they are not allowed to interfere in Afghanistan affairs after their withdrawal.”

Wasiq is a senior member of the Taliban’s political office which has been operating in Doha in recent years. He was deputy intelligence minister in the regime when the Taliban controlled most of Afghanistan until 2001.

After U.S.-led forces toppled the regime after 9/11, Wasiq was imprisoned in Guantanamo Bay from 2002 until he and four other senior terrorists were released by the Obama administration in 2014 in exchange for U.S. Army Sgt. Bowe Bergdahl, who had been held by the Haqqani Network since 2009.