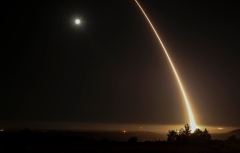 (CNSNews.com) – For the second time in five months, the Pentagon is delaying a long-planned test launch of an intercontinental ballistic missile, this time to signal to China that the U.S. does not want to escalate even further the current tensions over Taiwan.

A senior Republican senator blasted the decision, saying it was time for the U.S. to “project strength, rather than offer empty, conciliatory gestures” to authoritarian “bullies” like Chinese President Xi Jinping.

The White House announced the decision Thursday, at a time when China is firing ballistic missiles and carrying out military exercises unprecedented both in scale and in proximity to Taiwan, in a show of strength and protest against House Speaker Nancy Pelosi’s recent visit to the island.

“We do not believe it is in our interest, Taiwan’s interest, the region’s interest, to allow tensions to escalate further, which is why a long-planned Minuteman III ICBM test scheduled for this week has been rescheduled for the near future,” National Security Council coordinator for strategic communications John Kirby told a White House briefing.

Kirby said the postponement, which he indicated would only be for “a couple of weeks,” was aimed at demonstrating “the behavior of a responsible nuclear power by reducing the risks of miscalculation and misperception.”

Rescheduling the test of the would in no way impact the readiness or reliability of America’s nuclear deterrent, he said.

“The decision came in light and in context of the tensions that we’re seeing right now – and they’re pretty escalated.  I mean, it’s – temperature is pretty high. “

“And the president believed, and the national security team believed, that a strong, confident, capable nuclear power can afford to wait a couple of weeks for a test to make it clear – not just in word, but in deed – how serious we are when we say we have no interest in escalating the tensions.”

The U.S. Air Force tests unarmed Minuteman IIIs about four times a year, launching them from the Vandenberg Space Force Base in California. Typically the dummy warhead splashes down in the Pacific Ocean near Kwajalein Atoll in the Marshall Islands, more than 4,000 miles away. (The missile has a maximum range of more than 6,000 miles.)

“We recognize at this moment of tension how critical it is that both the United States and Russia bear in mind the risk of miscalculation, and take steps to reduce those risks,” Kirby – in his then capacity as Pentagon press secretary – said at the time.

That decision was also initially described as a “postponement,” although a month later the U.S. Air Force confirmed that the test had been canceled altogether.

“To truly lead against the rising tide of authoritarianism that China and Russia represent, we must project strength, rather than offer empty, conciliatory gestures,” he said in a statement. “We cannot afford to mortgage our future security to appease bullies like Xi and Putin.”

“The Biden administration clearly does not fully grasp the seriousness of this challenge, and the imperative of quickly modernizing our strategic forces to meet both the Chinese threat, as well as that posed by Russia,” Inhofe said.

“Earlier this year, the administration canceled a critical test of a U.S. intercontinental ballistic missile in response to Russian threats over Ukraine – as we know, that decision didn’t deter anything.”

Inhofe said the administration was now “once again allowing hostile powers – this time China – to dictate how we sustain and modernize our nuclear deterrent.”

The U.S. has in its arsenal an estimated 400 silo-based Minuteman III ICBMs, located at air force bases in southeastern Wyoming, central Montana, and northern North Dakota.

The missile, which first went into service in 1970, is due to be replaced around the late 2020s by a next-generation silo-launched ICBM known as LGM-35A Sentinel, being developed by Northrop Grumman.

In 2013 the Obama-Biden administration delayed a scheduled Minuteman III test, at a time of heightened tensions after North Korea carried out a nuclear test.

It said the aim was to ensure that the missile test “would not be misinterpreted as something in response to the situation on the peninsula, or something that would potentially exacerbate tensions on the peninsula.” The test went ahead six weeks later.