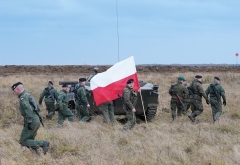 (CNSNews.com) – Ahead of an extraordinary NATO summit where Poland is expected to propose a peacekeeping operation in Ukraine, U.S. Ambassador to the U.N. Linda Thomas-Greenfield said Sunday the U.S. would not provide troops for any such mission.

“I can’t preview what decisions will be made at this NATO conference and how NATO will respond to the Polish proposal,” Thomas-Greenfield told CNN’s “State of the Union.”

“What I can say is, American troops will not be on the ground in Ukraine at this moment. The president has been clear on that,” she said. “And other NATO countries may decide that they want to put troops inside of Ukraine. That will be a decision that they have to make.”

President Biden is traveling to Brussels for the special NATO meeting on Thursday. On Sunday, the White House announced an addition to his itinerary – a stop in Warsaw on Friday for talks with Polish President Andrzej Duda.

Poland is the NATO ally most severely impacted by President Vladimir Putin’s invasion of Ukraine, having taken in more than 2.05 million of the 3.3 million Ukrainians who have fled their country since the war began on February 24.

After being stung by the Pentagon’s rejection of a proposal to send its MiG-29 fighters to a U.S. base in Germany for transfer to Ukraine, Poland is stressing that the peacekeeping proposal is one for the alliance as a whole to decide upon.

“We can’t take any decisions unilaterally,” Polish Ambassador to the U.S. Marek Magierowski said on the same show. “All such decisions, no matter how radical they seem to be now, have to be taken by all NATO members.”

Magierowski acknowledged that the idea – which he described as a “preliminary concept” – would be a complicated one.

“But I believe we have to explore every option and every avenue to stop this aggression and this unprovoked war as quickly as possible – of course, without engaging Russia in direct military confrontation, because this is not the intent.” 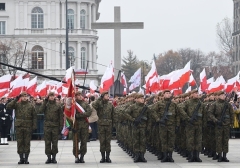 Asked if Polish troops would be part of such a mission, he said Poland was “willing and ready to help the Ukrainians as much as possible, and, again, within the framework of NATO cooperation, to defend themselves.”

“Again, we are not talking about a possible escalation and possible engagement of NATO troops in Ukraine. I fully agree with most Polish and Western politicians who say that it would be too escalatory.”

Russian Foreign Minister Sergei Lavrov insinuated at the weekend that Poland had ulterior motives for wanting a peacekeeping mission.

“I don’t rule out that if this decision were to pass the bulk of the peacekeeping force would be from Poland and it would take control western Ukraine and Lvov,” the state news agency TASS quoted Lavrov as saying.

“They would then stay there for a long while, and maybe that’s the point of the plan.”

It’s not yet clear exactly what Poland has in mind, but officials in Warsaw confirmed on Sunday that Duda would put forward ideas at the NATO summit on Thursday.

Polish deputy prime minister for security Jaroslaw Kaczynski earlier referred to NATO or “possibly some wider international structure” overseeing a mission, while chief aide to the prime minister, Michal Dworczyk said the appeal was “to the whole free world, to work out a solution that would realistically have the ability to suppress the Russian aggression.”

Last week, NATO secretary-general Jens Stoltenberg appeared to dismiss the call for a peacekeeping initiative. Asked at a Wednesday press briefing about the Polish suggestion, he indicated the alliance would not deploy troops to Ukraine for such a purpose.

“Of course we support peace efforts, we call on Russia and President Putin to withdraw its forces, but we have no plans of deploying NATO troops on the ground in Ukraine,” he said.

One day later State Department spokesman Ned Price when asked about the Polish proposal reiterated that the U.S. wants “to avoid doing anything that would prolong this war or that would expand this war.”