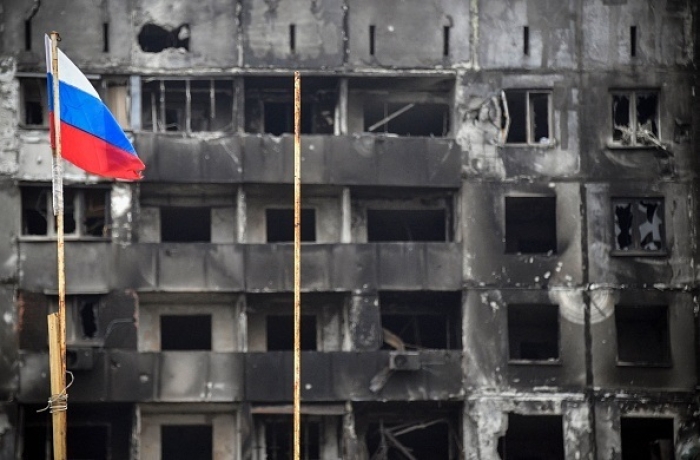 A Russian national flag flies in front of buildings destroyed by Russian forces in the war-ravaged city of Mariupol, southeastern Ukraine. (Photo by Alexander Nemenov/AFP via Getty Images)

(CNSNews.com) – Moscow is working to bring “into its orbit” newly occupied areas in Ukraine, a senior U.S. diplomat said on Thursday, underlining concerns about Russian proxies replacing Ukrainian authorities as well as moves to invite Russia to annex the region around the key southeastern city of Kherson.

“Russia’s forces are removing the democratically elected officials in various municipal councils, who according to very credible and disturbing reports are being kidnapped, interned, disappeared, and sometimes killed,” said Michael Carpenter, U.S. ambassador to the Organization for Security and Cooperation in Europe (OSCE).

“In their place, according to these reports, Russia is substituting its puppets and proxies, who, like their counterparts in the so-called Donetsk and Luhansk ‘people’s republics,’ operate in the style of a local mafia, relying on violence and terror.”

He cited schools being forced to adopt a Russian curriculum, the changing of place names to Russian ones, the imposed use of the Russian ruble instead of Ukraine’s currency, and attempts to “erase all signs of Ukrainian culture or identity.”

Carpenter pointed to the situation in Kherson – the first major Ukrainian city to fall to Russian troops in early March – where he said “illegitimate proxies have increasingly indicated an intention to ‘petition’ Russia to annex Kherson.”

Russian media outlets quoted Kremlin spokesman Dmitry Peskov as saying in response that “the people of Kherson region must decide for themselves whether such a request should be made or not.”

“Such a far-reaching decision must have a clear legal base and be absolutely legitimate, like it was with Crimea,” he said.

Peskov’s claim that Crimea’s annexation was legal and legitimate is disputable.

Putin in 2014 annexed the strategically-situated Black Sea peninsula after a referendum not recognized by a large proportion of the international community. The U.N. General Assembly in a 100-11 vote passed a resolution calling on governments not to recognize any change in Crimea’s status. Fifty-eight members abstained.

The Kherson region borders Crimea and the Dnieper River, one of Europe’s longest, is an important source of freshwater to Crimea. (Ukraine blocked a canal after Russia’s annexation, depriving the arid peninsula of crucially-needed supplies.)

Controlling the Kherson region into the future would help Russia to consolidate the “land bridge” it seeks to establish linking Crimea and the Donetsk and Luhansk regions to its own sovereign territory, according to Capitol Hill testimony by Director of National Intelligence Avril Haines this week.

Ukrainian President Volodymyr Zelenskyy has spoken of the goal of returning all of the country to Ukrainian sovereignty – the areas seized since the invasion began; Crimea; and the Donetsk and Luhansk regions, whose so-called “people’s republics” were recognized by Putin last February.

On Thursday, however, Putin reiterated Moscow’s stance that “people’s republics” will never return to Kyiv, with references to their “sovereignty” and “independence.”

In a statement of greeting to the head of the “Luhansk People’s Republic,” Leonid Pasechnik, Putin declared himself to be confident “that together we will uphold the independence, sovereignty and territorial integrity of the republic.”

“Ukraine’s neo-Nazi authorities will not be allowed to return to this land,” Pasechnik told Russia’s NTV channel later in the day.

In his address in Vienna, Carpenter also gave an update on reports that Russia is forcibly relocating tens of thousands of Ukrainian civilians to Russian or Russian-held territory.

He said many are also being subjected to interrogations and mistreatment in so-called “filtration camps,” where Russians attempt to identify those with ties to the government or military or loyal to Kyiv.

“Numerous eyewitness accounts indicate that ‘filtering out’ entails beating and torturing individuals to determine whether they owe even the slightest allegiance to the Ukrainian state,” he said.

Those found to have such allegiance are reportedly transferred to the “Donetsk People’s Republic,” he said, where according to reports their fate could include being killed.

In Geneva, U.N. High Commissioner for Human Rights Michelle Bachelet told a special session of the Human Rights Council that her office has documented 204 cases of enforced disappearances of Ukrainians since the invasion began, most of them at the hands of Russian forces or proxies.

“Among them are public officials, journalists, civil society activists, retired servicemen of the armed forces as well as other civilians,” she said. “According to information available to us, 38 of them have been released and returned home, and five – four men and one woman – were found dead.”

Bachelet said the real number of enforced disappearances was likely higher than the number of those her office has documented.