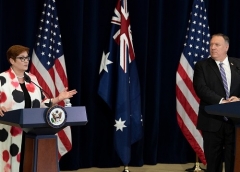 (CNSNews.com) – Underlining the strength of what he has dubbed an “unbreakable alliance,” Secretary of State Mike Pompeo on Tuesday praised Australia for standing firm in the face of “intense, continued, coercive pressure from the Chinese Communist Party to bow to Beijing’s wishes.”

He commended Australia for “publicly condemning China’s disinformation campaign” about the coronavirus outbreak, for insisting on an independent investigation into its origin, and for backing calls – ultimately unsuccessful – to have Taiwan participate in the World Health Organization’s annual assembly.

Canberra’s stances have angered the CCP, which responded by slapping tariffs and import bans on Australian produce. China’s ambassador warned of a boycott, and officials in Beijing advised Chinese tourists and students not to visit or study in Australia, alleging “a lot of discrimination against Chinese and Asian people” there.  China is Australia’s largest trading partner.

Alluding to such actions, Pompeo said it was “ unacceptable for Beijing to use exports or student fees as a cudgel against Australia. We stand with our Australian friends.”

Pompeo was speaking alongside Defense Secretary Mark Esper and their Australian counterparts, during the annual bilateral ministerial talks known as AUSMIN.

The two governments take turns hosting the dialogue. Foreign Minister Marise Payne and Defense Minister Linda Reynolds traveled to Washington for this year’s meetings despite the fact that they and their delegations will face a mandatory 14-day quarantine on their return.

Pompeo said the talks began with lengthy discussions “about the Chinese Communist Party’s malign activity in the Indo-Pacific region, and indeed all around the world.”

“The United States commends the Morrison government for standing up for democratic values and the rule of law, despite intense, continued, coercive pressure from the Chinese Communist Party to bow to Beijing’s wishes,” he said.

‘A clear signal to Beijing’

China’s behavior in the South China Sea, where it’s locked in disputes with neighboring countries over its claims to most of the strategic waterway, also featured in the talks.

On July 13, Pompeo released a statement declaring China's claims to be “completely unlawful,” and last week Australia in a formal declaration to the U.N. also rejected the claims, saying they had “no legal basis.”

Beijing dismissed both the U.S. and Australian positions, saying its sovereign rights in the area were not affected by such “wanton accusations.”

The U.S. Navy pointedly carries out what it calls “freedom of navigation” operations in the South China Sea. Asked whether Australia had agreed to conduct its own such operations closer to disputed islands there, Reynolds did not respond directly, but did say Australian naval vessels would continue to transit through the waterway in accordance with international law.

“Australia has a long history of transiting through the region – unilaterally, bilaterally, with regional friends, and also multilaterally,” she said.

“These exercises not only bolster interoperability, but also send a clear signal to Beijing that we will fly, we will sail, and we will operate wherever international law allows and defend the rights of our allies and partners to do the same,” he said.

In a recently updated Defense Strategic Update document, Australian Prime Minister Scott Morrison wrote that “our region is in the midst of the most consequential strategic realignment since the Second World War.”

“The Indo-Pacific is at the center of greater strategic competition, making the region more contested and apprehensive. These trends are continuing and will potentially sharpen as a result of the coronavirus (COVID-19) pandemic,” he said, introducing plans to devote 270 billion Australian dollars ($193 billion) to defense spending over the next 10 years.

Reynolds said Tuesday the spending commitment would “allow Australia to make its strongest contribution to our shared alliance security interests, right across the Indo-Pacific.”

Esper called defense strategy “bold” and “far-reaching,” saying that it placed Australia “at the forefront as a really extremely capable partner to the United States, and a very capable partner in terms of defending that international rules-based order.”

The Australian ministers stressed that their government would make decisions based on its own national interests.

Speaking before the AUSMIN talks ended, Chinese foreign ministry spokesman Wang Wenbin accused the U.S. of “doing everything possible to sabotage China-U.S. relations,” and expressed the hope that its consultations with Australia “won’t send any wrong signals.”