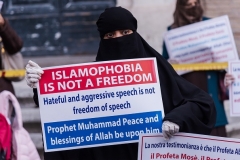 Muslims protest near the French Embassy in Rome against the publication of Mohammed cartoons in France. (Photo by Stefano Montesi/Corbis/Getty Images)

(CNSNews.com) – At a time when cartoons lampooning Mohammed have revived tensions between offended Muslims and free speech advocates, an annual U.N. resolution on the “promotion of interreligious and intercultural dialogue” was passed this week by a recorded vote, in contrast to the standard adoption by consensus of previous years.

Pakistan, which sponsored the measure jointly with the Philippines, noted on Thursday that the text had passed “by an overwhelming majority” – the vote was 90-0 – but was silent on the unusual nature of the adoption.

For the first time in years, a recorded vote was called, and 52 member-states abstained. Another 51 member-states simply didn’t vote, meaning less than half of the total U.N. membership backed the resolution.

Among those abstaining was the United States, whose delegate, David Messenger, explained that the U.S. supports both freedom of expression, and freedom of religion or belief.

“We oppose any attempts to unduly limit the exercise of these fundamental freedoms,” he said, pointing in particular to a paragraph stating that while everyone has the right to freedom of expression, “the exercise of this right carries with it special duties and responsibilities and may therefore be subject to certain restrictions.”

Messenger said the wording suggested “that protections for freedoms of expression and religion or belief are at odds with one another.”

“We strongly believe that protecting the freedom of religion and the freedom of expression promotes mutual respect and pluralism, and is essential to human dignity and a robust civil society.”

Joining the U.S. in abstaining were dozens of European nations, along with Australia, Canada, New Zealand, and two African countries, Lesotho and Madagascar.

German representative Günter Sautter, speaking on behalf of the European Union, also raised concerns about the measure. He said proposals which the E.U. had sought to put forward during negotiations on the text aimed among other things to “refute the notion that religions or belief systems, as such, can be insulted,” and “reject the idea that religious symbols, as such, have sacred value.”

The question of perceived blasphemy has stoked fresh tensions between liberal democracies and Islamic states over recent months. French President Emmanuel Macron angered some in the Islamic world after defending the right to display cartoons of Mohammed in officially secular France.

Macron did so after a Pakistani refugee stabbed two people in Paris in September, and a school teacher near Paris was beheaded the following month by a Muslim angered by his use of a Mohammed cartoon during a classroom lesson focused on freedom of speech. In a subsequent terror attack, a knife-wielding Muslim killed three preparing for Mass at a Catholic Church in Nice.

The resolution adopted in New York does not refer directly to images of prophets – or mention purported Islamophobia – but does recognize “the significance accorded to religious symbols by individuals in many religions and societies, and in this regard underscor[es] the importance of promoting mutual respect, tolerance and peaceful coexistence.”

‘… must be universally outlawed’

Speaking during the debate, Pakistani representative Munir Akram expressed concern about what he called the “condoning [of] offensive and provocative actions.”

“While discrimination and acts of violence continue to happen against individuals of all religions, a particularly alarming trend is the resurgence of anti-Muslim hatred and Islamophobia, glimpses of which we have seen in many countries during the recent months,” he said.

“Such vilification and negative stereotyping of adherents of one of the largest religions in the world only perpetuates dangerous, self-fulfilling prophecies such as that of a ‘clash of civilizations,’ and thus must be addressed on an urgent basis by the international community.”

Pakistan, which boasts some of the world’s most draconian blasphemy laws, has long led a campaign at U.N. forums against what proponents term “defamation of Islam.”

The foreign ministry in Islamabad on Thursday hailed the passage of the resolution in New York, calling it part of “Pakistan’s global efforts to promote interfaith harmony, tolerance, respect for each other’s religions and values, and peaceful co-existence.”

“Prime Minister Imran Khan has repeatedly called upon the international community to counter Islamophobia and promote respect for religious sensitivities,” the ministry said. “The adoption of this resolution by the U.N. General Assembly is part of Pakistan’s diplomatic efforts inter alia for raising awareness about Islamophobia and countering the defamation of sacred religious personalities and symbols.”

When he addressed the U.N. General Assembly high-level opening last September, Khan declared that Islamophobia was on the rise, with Muslims being “targeted with impunity,” mosques being desecrated, and Mohammed being insulted “in the name of freedom of speech.”

“We stress that willful provocations and incitement to hate and violence must be universally outlawed,” the Pakistani prime minister said.

In Pakistan, Where ‘Blasphemy’ Brings Death Sentence, PM Urges an End to ‘Attacks on Islam and Our Prophet’ (Oct. 30, 2020)
Turkey’s Erdogan and Macron of France Clash Over Islam, Mohammed Cartoons (Oct. 27, 2020)