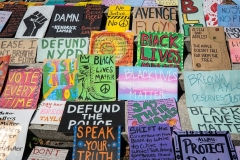 Signs of racial unrest in the Brooklyn Borough of New York on July 25, 2020, USA. (Photo by Ira L. Black/Corbis via Getty Images)

(CNSNews.com) – The U.N. Human Rights Council, boosted by the Biden administration’s decision to re-engage, kicks off its first session of the year on Monday with a program that is silent on two pressing situations taking place in two of its most powerful member-states – China’s mass rights violations against minority Muslims in Xinjiang, and Russia’s persecution of the anti-Putin activist Alexei Navalny.

The session will make time for discussions on “systematic racism” against black Americans at the hands of U.S. law enforcement agencies.

Also on the agenda are no fewer than four separate reports focused on Israel – one “ensuring accountability and justice for all violations of international law in the Occupied Palestinian Territory”; one  on “the consequences of settlement activity and other steps taken towards formal annexation in the occupied Palestinian territory”; one on “human rights in the Occupied Syrian Golan”; and a report on the implementation of two resolutions condemning Israel, adopted during two “special sessions” more than a decade ago.

Israel features in virtually every regular session of the HRC, as it – alone out of 193 U.N. member-states – is the subject of a permanent agenda item.

In addition to its regular three sessions a year, the council occasionally holds “special sessions,” when they are requested by at least one-third of its members.

Of 29 such extraordinary sessions held during the council’s 15-year history, Israel has been the focus of eight – more than any other country. The Syrian civil war has accounted for five special sessions, and crises in Burma for three. No special sessions have been called in response to situations in North Korea, Iran, Venezuela, Cuba, Saudi Arabia, Yemen, Russia, or China.

The regular session starting Monday, and running through March 23, will discuss human rights situations in some of those countries, notably Iran, Venezuela, North Korea, and Syria.

But neither China, whose treatment of Uyghur and other minority Muslims has outraged human rights advocates around the world – constituting genocide and war crimes, in the view of the U.S. – nor Russia, whose imprisonment of Navalny shortly after he survived an assassination attempt for which he blames the Kremlin’s security services, will be put in the spotlight.

Echoing the assertions made by the Obama administration more than a decade ago, Biden administration officials argue that U.S. engagement offers the best opportunity to work for improvements at the HRC. But the factors that enable rights-abusing regimes to seek and win seats year after year are inbuilt, and the council has defied efforts by the Bush, Obama, and Trump administrations to press for reforms.

“We recognize that the Human Rights Council is a flawed body, in need of reform to its agenda, membership, and focus, including its disproportionate focus on Israel,” Secretary of State Antony Blinken said earlier this month. “However, our withdrawal in June 2018 did nothing to encourage meaningful change, but instead created a vacuum of U.S. leadership, which countries with authoritarian agendas have used to their advantage.”

The administration’s decision to re-engage with the HRC will not mean immediate membership, as elections to fill vacant seats were held in New York last fall. But U.S. diplomats will be active observers this year, and the U.S. may run for a seat later this year for a 2022-2024 term.

As an observer, Blinken said, the U.S. “will have the opportunity to speak in the council, participate in negotiations, and partner with others to introduce resolutions. It is our view that the best way to improve the council is to engage with it and its members in a principled fashion. We strongly believe that when the United States engages constructively with the council, in concert with our allies and friends, positive change is within reach.”

On the day Blinken made the announcement, the chargé d’affaires at the U.S. Mission in Geneva, Mark Cassayre, took part in an HRC organizational meeting in preparation for the session that begins on Monday, and pledged that the U.S. would engage with a “spirit of introspection, collaboration, and renewal.”

The administration is also expected to resume funding, after the Trump administration in fiscal years 2017-2020 withheld from U.S. contributions to the U.N. regular budget a proportionate amount that would have gone to the HRC.

Appropriations legislation signed into law in December 2019 prohibits funding for the HRC unless the secretary of state certifies that U.S. participation is important to U.S. national interests, and determines that the council is “taking significant steps to remove Israel as a permanent agenda item” and “taking actions to ensure integrity in the election of members.” Neither condition has been met.

U.S. taxpayers account for 22 percent – more than one-fifth – of the U.N. regular budget. For the other four permanent Security Council members the amounts are: China 12.0 percent, Britain 4.5 percent, France 4.4 percent, and Russia 2.4 percent.