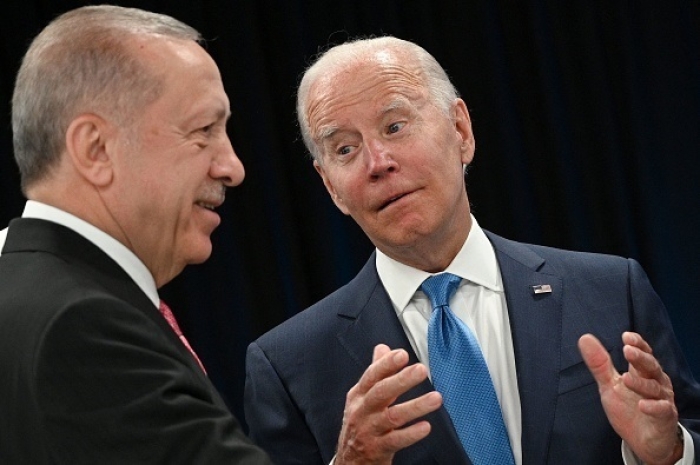 His latest comments come amid newly-voiced objections by U.S. lawmakers to Turkey’s request to buy 40 F-16 Fighting Falcons, and 79 kits to modernize outdated F-16s in its fleet.

The request was first made in the fall of 2021, but the Wall Street Journal reported on Friday that the administration is now preparing to seek congressional approval to move ahead. It prompted sharp criticism from several lawmakers from both parties, including the chairman of the Senate Foreign Relations Committee, Sen. Bob Menendez (D-N.J.).

Some of those speaking out raised specifically the hurdles Erdogan is placing in front of Finland and Sweden’s bids to join NATO, in the wake of Russia’s invasion of Ukraine.

Erdogan, who faces an election in June, has tied his country’s approval of NATO accession to the two countries’ willingness to act against exiled Turks wanted for alleged terror-related offenses. Sweden has extradited several wanted individuals but its High Court has blocked the extradition of others named by Turkey, leading to a standoff.

Despite the criticism on Capitol Hill, Erdogan during a visit to southwest Turkey gave no sign of backing down.

He said that his government had informed Sweden, “Look, if you don’t extradite the terrorists you have, then we can’t ratify this [NATO membership application] in our parliament.”

“First of all, they need to extradite nearly 130 terrorists in order for their bids to pass our parliament,” Erdogan added. “Unfortunately, they have yet to do this.”

For new members to join NATO, all 30 existing allies must ratify the application. Before Turkey does so, Erdogan wants Sweden and Finland to cooperate in his campaign against two foes – the Kurdistan Workers’ Party (PKK), and supporters of the U.S.-based self-exiled Turkish cleric, Fethullah Gulen, accused by Ankara of responsibility for a failed coup attempt in 2016.

Last week Sweden’s national news agency TT reported that four suspects wanted by Turkey for alleged links to Gulen would not be extradited, in line with a High Court ruling. Earlier, the same court blocked the extradition of an exiled journalist, Bulent Kenes, facing similar accusations.

Apart from Hungary, which says it will vote on approving NATO membership for Sweden and Finland early this year, Turkey is the only NATO ally holding out on ratification.

Menendez has long opposed the sale of F-16s to Turkey, citing concerns about Erdogan’s policies ranging from threatening behavior towards neighbor and NATO ally Greece over territorial disputes in the Aegean Sea, to cross-border offensives against Kurds in Syria, to repressive policies at home.

In response to the Wall Street Journal report, Menendez reiterated that opposition, saying he will not approve the sale until Erdogan “begins to act like a trusted ally.”

Once the State Department formally notifies Congress of a planned arms sale, lawmakers have 30 days before a license is issued to react, but blocking the sale requires twothirds majorities in both the House and Senate.

Despite the high bar, members of the Congressional Hellenic Caucus critical of Erdogan voiced determination in their opposition.

“Once again the Biden administration tries to reward Turkey for its continued bad behavior,” said Rep. Gus Bilirakis (R-Fla.), co-chair of the caucus. “Rest assured, my colleagues and I in Congress will ensure no such sale ever comes to pass.”

Rep. Chris Pappas (D-N.H.), the other co-chair, cited a range of Turkish actions to justify his opposition to the sale.

He noted that Ankara was sanctioned under the 2017 Countering America’s Adversaries through Sanctions Act (CAATSA) for buying Russian-made S-400 missile defense system in defiance of strong U.S. and NATO objections.

“Turkey has also unjustifiably held up the accession of Finland and Sweden into NATO, undertaken a record number of unauthorized incursions with military aircraft over Greek territory and national airspace, and constantly threatens Greece with war,” Pappas said.

“That Turkey could potentially be given American weapons, in clear violation of CAATSA, to conduct military operations against a NATO ally is unimaginable,” he said. “But that is the exact prospect that this notification to Congress raises.”

“The Biden administration should not even consider selling F-16 fighter jets to Turkey,” said Rep. Frank Pallone (D-N.J.). “Erdogan has shown that he cannot be trusted. He’s cozied up to Putin and other dictators, threatened to attack Greece, and committed numerous human rights abuses.”

“Now he’s threatening to block Finland and Sweden’s entry into NATO. Enough is enough,” Pallone said. “The U.S. should not trust him, and we certainly should not reward his harmful behavior. I will continue working with my colleagues to oppose the sale of military equipment to Turkey.”

Rep. Nicole Malliotakis (R-N.Y.) tweeted a photo of Erdogan meeting with Russian President Vladimir Putin and Iranian President Ebrahim Raisi, calling it “just one reason why Congress must reject such a sale.”

After President Biden met with Erdogan on the sidelines of the NATO summit in Madrid last the summer, Biden confirmed his support for the F-16 sale, and voiced optimism that Congress would approve the sale.

Turkish Foreign Minister Mevlut Cavusoglu is due to hold talks with Secretary of State Antony Blinken in Washington this week.

Friday’s Wall Street Journal report said the administration wants to advance both the F-16 sale to Turkey and a separate request by Greece to buy next-generation F-35 joint strike fighters.