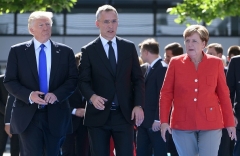 President Trump and German Chancellor Angela Merkel with NATO secretary-general Jens Stoltenberg at a summit in Brussels in 2017. (Photo by Emmanuel Dunand/AFP via Getty Images)

(CNSNews.com) – President Trump confirmed on Monday that he plans to reduce significantly the number of American troops stationed in Germany, characterizing the NATO ally as “the worst abuser” of U.S. largesse in Europe.

While Germany looks to the U.S. to help defend Europe against Russia, he said, Germany was doing energy deals that benefit the Russians – a reference to the controversial Nord Stream 2 gas pipeline project.

“Everyone talks about Trump with Russia,” he said at the White House, alluding to domestic criticism that he is too soft on President Vladimir Putin. “Well I brought this up a long time ago: Why is Germany paying Russia billions of dollars for energy, and then we’re supposed to protect Germany from Russia?”

“How does that work? It doesn’t work.”

Germany has been “delinquent for years,” he said, adding that “they owe NATO billions of dollars, and they have to pay it.”

Germany does not in fact “owe” funds to NATO, but it has yet to meet a commitment by all NATO allies to devote at least two percent of their national GDP to defense spending, by 2024.

Out of 30 NATO allies, only nine have achieved that so far, according to the most recent figures released by the alliance – the United States, Bulgaria, Greece, Britain, Estonia, Romania, Lithuania, Latvia, and Poland.

There are reportedly some 34,500 U.S. troops currently in Germany, with numbers fluctuating depending on exercises and other factors. But the cap is 52,000, and Trump said that figure would be reduced to 25,000.

The planned cut was first reported by the Wall Street Journal earlier this month, and last week the German government confirmed that it had been notified.

Trump suggested the drawdown plan could be altered, depending on Germany’s actions.

“Until they pay, we’re removing our soldiers – a number of our soldiers, by about half. And then when we get down to 25,000 we’ll see where we’re going.”

Trump also expressed dissatisfaction with German and broader European Union trade policies, calling the situation very unfair to the U.S., and adding, “I would say by far the worst abuser is Germany.”

Trump did not say where the troops withdrawn from Germany would go. Last fall he signed a defense agreement with Polish President Andrzej Duda providing for “approximately 1,000” more U.S. forces to be stationed in Poland – in addition to a rotational pool of 4,500 troops already there.

Poland, notably, is one of the nine alliance members now meeting the two percent target – a point emphasized by Trump during an Oval Office meeting with Duda last summer. (NATO members previously under Soviet domination are typically most leery of Moscow, and of the nine allies on track with defense spending, six were formerly in the Soviet/Warsaw Pact bloc.)

Critics of the plan to reduce troop numbers in Germany, including some Republicans, worry that it will benefit Putin.

Last week Republican members of the House Armed Services Committee argued in a letter to Trump that reducing troop numbers in Europe “would significantly damage U.S. national security as well as strengthen the position of Russia to our detriment.”

But while Russia’s foreign ministry earlier welcomed “any steps by Washington to scale down its military presence in Europe,” it also warned that Trump should not move some of the troops to Poland.

In the 1990s, NATO’s European members spent an average of around 2.3 percent of GDP on defense.  Today, even with substantial improvements made in the last four years, the average is 1.63 percent.

President George W. Bush tried to get a mandatory two percent defense spending target included in a communique at a NATO summit in Prague in 2002, but was unsuccessful.

When Latvia, Estonia and Lithuania – formerly Soviet states – sought to join NATO, the alliance required them to commit to two percent defense spending. They joined in 2004.

At a 2006 summit in Riga, Latvia, NATO leaders for the first time made a pledge – but only a verbal  one – and it was only at a summit in Wales in 2014 that the two percent commitment was formalized and documented.

The summit came six months after Putin annexed Ukraine’s Crimea peninsula, and concerns about Russian aggression were credited for a 1.7 percent increase in real terms in NATO defense expenditure over the following year.

NATO secretary-general Jens Stoltenberg announced last December that by the end of 2020, NATO’s European members plus Canada will have invested $130 billion more on defense than they were in 2016, and forecast an accumulated increase of $400 billion by the end of 2024.