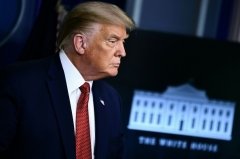 President Trump holds a press briefing at the White House on Monday. (Photo by Brendan Smialowski/AFP via Getty Images)

(CNSNews.com) –  China, Iran and – yes – Russia are hoping Joe Biden wins the November election, President Trump claimed on Monday, portraying a second presidential term as something the three unfriendly regimes are all anxious to avoid.

“They’re just waiting to see who wins, because they are hoping – they are hoping that Joe Biden wins. Sleepy Joe,” Trump told reporters at the White House. “And if he wins, you know what’s going to happen? China will own us.”

Trump predicted the Iranian regime would settle for a “deal” with the U.S. within a month of an election, if he wins, although he said he was not sure if he’d even want to pursue an agreement with China. (“We are upset with China because of what they did. China was not good,” he said earlier, in reference to Beijing’s handling of the coronavirus outbreak that emerged in Wuhan late last year.)

The “deal” Trump is talking about doing with Iran would presumably be a very different one from the nuclear deal negotiated during the Obama era, which Trump scorned when running for office and withdrew from in 2018.

While foreseeing the likelihood of Tehran feeling compelled to strike an agreement with a second Trump administration, he said, “I don’t know that we’ll want to have a deal with China, to be honest with you.”

“So I’m saying to myself, gee, but China wants us to lose very badly,” Trump declared. “And you know who else is not happy with us winning? Russia.”

Trump argued that Russia does not want him to win because he had succeeded in getting NATO allies to increase their defense spending by a combined $400 billion to strengthen the alliance, and because of his vocal opposition to the Nord Stream 2 pipeline, which is projected when complete to double the current supply of Russian natural gas to Germany.

A reporter noted that the National Counterintelligence and Security Center reported in recent days that Russia is interfering in the U.S. election, and asked whether he has raised the issue directly with President Vladimir Putin.

Trump pointed out that the NCSC had in fact reported on election meddling by Russia, China and Iran – but said “the fake news, they seem to think Russia plays the best so –”

As the reporter protested, Trump continued, “Look the other day they said three countries, they said China and Russia and Iran. And some reporter got up and said, ‘Russia is meddling.’ I said, ‘Well, didn’t it mention China and Iran? Why didn’t you mention them too?”

The NCSC assessment said Russia was trying to denigrate Biden and boost Trump’s candidacy; China wants Trump to lose and is “expanding its influence efforts ahead of November 2020 to shape the policy environment in the United States”; and Iran will probably use online influence and disinformation in a bid to undermine Trump and U.S. democratic institutions, and divide the country ahead of the elections.

House Speaker Nancy Pelosi has questioned the validity of the NCSC’s assessment regarding China wanting Trump to lose. She and House Intelligence Committee Chairman Adam Schiff (D-Calif.) in a joint statement complained that the assessment “treats three actors of differing intent and capability as equal threats to our democratic elections.”

The Trump administration has over the past two years ratcheted up pressure in response to malign activities at home and regionally by the Chinese and Iranian governments in particular.

It has also taken punitive steps against Moscow, however, in response to 2016 election meddling, alleged violations of arms-control treaties, continued military intervention in Ukraine, and the attempted assassination in England in 2018 of a former Russian spy. Russian allies in the Iranian and Assad regimes have come under U.S. military attack.

The Democrats have depicted Trump as soft on Russia, with Pelosi periodically insinuating that Putin “has something” on Trump.