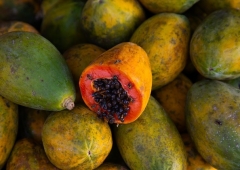 Pawpaw fruit in west Africa. (Photo by Eric Lafforgue/Art in All of Us/Corbis via Getty Images)

(CNSNews.com) – The health minister of Tanzania has suspended the head of the East African country’s national laboratory, after the lab sent back positive COVID-19 test results for samples taken from a goat, a quail, and a pawpaw.

Officials suspicious of the quality of testing for the novel coronavirus had sent a selection of unconventional samples as an experiment. Each was given the name and age of a fictitious patient and lab staff were oblivious to their origins.

The lab sent back positive for COVID-19 results for the samples from the goat, quail and pawpaw, while a sample taken from a sheep tested negative, according to Tanzanian President John Magufuli.

Speaking during a televised swearing-in ceremony for a new cabinet minister, Magufuli said he suspected a “dirty game” was being played at the lab.

“We have noticed a lot of controversies there,” local newspapers quoted him as saying. “With this move we have all reasons to doubt the [test] kits.”

The test kits were imported, and the prime minister in his remarks recalled that he has said in the past Tanzanians should not view every piece of assistance from abroad as “good for this nation.”

He also advised other countries in Africa using similar kits to carry out tests of their own, predicting they would corroborate the findings in Tanzania.

After Magufuli’s comments, Health Minister Ummy Mwalimu suspended the director of the laboratory and a quality-control official and named a ten-person committee to investigate the testing regimen.

Magufuli did not reveal the test kits’ country of origin, although Chinese state media have been reporting for weeks about Chinese medical supplies including tests, face masks, and personal protective equipment being provided to countries in Africa, a key target region for Beijing’s Belt and Road initiative.

During the coronavirus pandemic the quality of some imported Chinese medical goods has been called into question in Europe and Canada.

President of Madagascar Andry Rajaolina with a bottle of the herbal tonic on his desk. (Photo: Rajaolina/Twitter)

Africa has so far reported fewer than 40,000 confirmed coronavirus cases, with fewer than 1,100 deaths across the continent. Testing levels are low, however, and countries with larger populations or more testing, including South Africa, Nigeria, Egypt, Ghana, and Algeria, are reporting the most cases and deaths.

Some African governments are looking closer to home for possible therapies, and the president of Madagascar made headlines recently with claims that a herbal tonic made from the plant Artemisia annua (sometimes known as wormwood or mugwort) is a “cure” for COVID-19.

The research institute that developed the tonic is more cautious in its claims, saying it could have preventive properties. But President Andry Rajaolina is making it mandatory for children returning to school.

Other countries in Africa are showing interest. Two smaller nations, Guinea Bissau and Equatorial Guinea, have already received supplies of the product and other countries have placed orders. Tanzania’s Magufuli announced his government will dispatch an aircraft to Madagascar soon to bring some back.

While not ruling out the use of traditional remedies altogether, it said they should undergo the same kind of testing as any other treatment.

“Medicinal plants such as Artemisia annua are being considered as possible treatments for COVID-19 and should be tested for efficacy and adverse side effects,” it said. “Africans deserve to use medicines tested to the same standards as people in the rest of the world. Even if therapies are derived from traditional practice and natural, establishing their efficacy and safety through rigorous clinical trials is critical.”