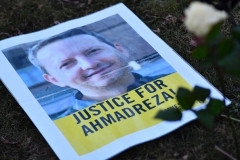 A flyer at a protest outside the Iranian Embassy in Brussels calls for justice for Ahmadreza Djalali, the physician on death row in an Iranian prison. (Photo by Dirk Waem/AFP via Getty Images)

(CNSNews.com) – The Iranian regime, which has a long history of hostage-taking, may be using the threat of execution against an imprisoned Iranian-Swedish physician as leverage in an attempt to secure the release of an Iranian diplomat on trial in Belgium for alleged terrorism on European soil.

Dr. Ahmadreza Djalali, accused of spying for Israel, was sentenced to death more than three years ago after being convicted of the unique Iranian offense of “spreading corruption on earth” (mofsed-e-filarz). He has now reportedly been transferred to a notorious prison near Tehran where executions are known to take place.

On Tuesday, Amnesty International said a judge had ordered Djalali’s transfer to Rejaee Shahr prison “TODAY to proceed with his imminent execution.”

Before his arrest during a research trip to Iran – he had been formally invited by the University of Tehran – the specialist in emergency medicine was a visiting professor at the Flemish University of Brussels.

In the nearby Belgian city of Antwerp, the trial of Iranian diplomat Assadollah Assadi is due to resume on Thursday this week, after opening on November 27.

Assadi and three others are accused of conspiring to bomb a large 2018 gathering near Paris of the exiled Iranian dissident movement, National Council of Resistance of Iran (NCRI), also attended by a number of prominent American and other foreign supporters. Among the former were President Trump’s personal attorney and former New York City Mayor Rudy Giuliani, former FBI Director Louis Freeh, and former House Speaker Newt Gingrich.

The regime was angered when a German court agreed to extradite Assadi to Belgium to stand trial, rejecting his claim of diplomatic immunity. Assadi refused to appear when the trial began last Friday – he was represented by legal counsel – and Iranian foreign ministry spokesman Saeed Khatibzadeh said Iran would not recognize any verdict coming out of the trial.

Assadi is accused of handing over bombmaking material to a Belgian-Iranian couple who were to have taken it to the rally but were intercepted by police en route. If convicted, he faces a prison term of 20 years.

Belgium’s state security service VSSE has informed prosecutors that Assadi had not gone rogue, but was carrying out a plan “conceived in the name of Iran and under its leadership.” Earlier, France froze Assadi’s assets and those of a top Iranian intelligence ministry official and ministry division, underlining suspicions of the regime’s responsibility for the plot.

Swedish Foreign Minister Ann Linde said on Twitter last week she had spoken to Iranian Foreign Minister Javad Zarif about Djalali, and that Sweden was “working to ensure that the verdict against Djalali is not enforced.”

In response, however, Zarif’s spokesman issued a statement saying Djalali was “in jail for security-related crimes,” and adding that Zarif had explained to Linde that Iran’s judiciary “is independent, and any interference in the issuing or enforcement of judicial verdicts is rejected and unacceptable.”

Iran's judiciary is not highly regarded abroad – both the U.S. and E.U. have sanctioned judges for gross rights abuses – and despite Zarif's assertions the regime has in fact frequently "interfered" by ordering or approving exchanges of imprisoned foreigners or dual nationals for alleged Iranian agents held abroad.

Just last week, Iran released a British-Australian academic, Kylie Moore-Gilbert, who had been imprisoned since September 2018 on espionage charges rejected by the Australian government as “baseless” and “politically motivated.” In exchange, Thailand freed three Iranian men imprisoned in that country since 2002, following a botched bomb plot allegedly intended to kill Israeli diplomats.

In two separate swaps last February and March, Iran freed a Frenchman and a German, in return for France and Germany releasing two Iranians wanted in the U.S. for violating Iran sanctions.

And last December, Iran released Xiyue Wang, a U.S. naturalized citizen and historian convicted of spying for the U.S., in exchange for an Iranian graduate student being held in the U.S. on charges of having violated sanctions on Iran.

The regime has not publicly linked Assadi’s trial with the imminent execution of Djalali, but the timing is feeding speculation.

Meanwhile, in a letter to supreme leader Ayatollah Ali Khamenei, more than 150 Nobel laureates urged him to free Djalali, while the World Medical Association, a confederation of medical associations representing more than 10 million physicians, made a similar appeal.

Amnesty International says that in a letter written from prison in mid-2017, Djalali said he was being incarcerated “solely because of his refusal to use his academic ties in European institutions to spy for Iran.”

U.S. nationals still in Iranian custody include Baquer Namazi and his son Siamak Namazi, who were arrested in Iran in 2016 and 2015 respectively. Baquer, in his 80s, is a former UNICEF official while Siamak is a businessman and former Wilson Center scholar. Both were sentenced in October 2016 to ten years’ imprisonment for cooperating with the U.S.

Another American citizen, environmentalist Morad Tahbaz, was arrested in early 2018 and also sentenced to ten years’ imprisonment, for “contacts with the U.S. enemy state.”