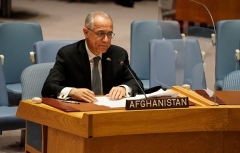 (Update: Corrects information about Afghanistan's ambassador to the United Nations in Geneva.)

(CNSNews.com) – As a U.N. committee prepares to meet to consider the Taliban’s demand to be given the Afghanistan seat at the world body, the current holder of the seat appealed again to the U.N. not to recognize the “Islamic Emirate of Afghanistan” or any government that is imposed by force.

Addressing a Security Council meeting on the crisis, Ambassador Ghulam Isaczai said the terrorist group that seized power in August continues to defy international calls to respect Afghans’ human rights, to form an inclusive government, and to cut ties with international terrorist groups, while continuing to impose “gender apartheid.”

He recalled that council members have said they would judge the Taliban on its actions, not words, and said Afghans expect them to keep their promise.

“It’s important that the international community engages with the Taliban in accordance with the commitments made in various U.N. and General Assembly resolutions – that is, not to recognize the reinstatement of the Islamic Emirate of Afghanistan, or any government imposed by force.”

Isaczai and his counterpart at the U.N. in Geneva, Nasir Ahmad Andisha, were both were appointed by the elected former government, which collapsed when President Ashraf Ghani fled the country as the Taliban entered Kabul.

Competing claims for Afghanistan’s U.N. seat are to be considered by a nine-member “credentials committee.” U.N. spokesman Stephane Dujarric confirmed on Thursday that the committee will meet during the week beginning November 29.

Two Republican lawmakers warned U.N. Secretary-General Antonio Guterres in a letter that giving the seat to the Taliban would “delegitimize the United Nations as an institution.”

“The Afghan Taliban repress the rights of women and girls, hunt down and murder individuals who have helped the United States and other NATO forces, suppress the freedom of speech and the press, and are strengthening ties with foreign terrorist organizations like al-Qaeda and the Haqqani Network,” they said. “Any government that acts in this manner deserves no recognition on the world stage.” 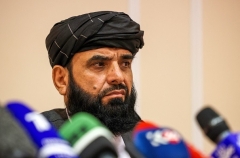 The Taliban has named its spokesman, Suhail Shaheen, as permanent representative of the ‘Islamic Emirate’ to the U.N. (Photo by Dimitar Dilkoff/AFP via Getty Images)

The Taliban earlier this week reiterated its request to be handed the country’s U.N. seat.

“The current government has sovereignty and writ all over the country and has support of the people, reflecting their aspirations,” said Taliban spokesman Suhail Shaheen.

“We have all the conditions needed for occupying the seat of Afghanistan at U.N. We hope, legal requirements will supersede political preferences,” he added. The Taliban last September named Shaheen as the “Islamic Emirate of Afghanistan’s permanent representative to the U.N.”

No government has yet formally recognized the regime although Pakistan, the fundamentalist group’s longstanding sponsor, has been leading efforts to encourage the move. Should the credentials committee decide in favor of the regime’s application for the seat, bilateral diplomatic recognition will likely follow.

In considering the Afghanistan case, they will be faced with a precedent, given the fact the Taliban once before asserted the right to be regarded as the country’s legitimate government.

After the group seized control of most of Afghanistan in 1996, the credentials committee repeatedly deferred a decision on U.N. representation, so by default the seat continued to be held by the previous government – even though it could claim control of roughly only a quarter of the country.

In the end the issue became moot, as U.S.-led forces toppled the Taliban regime in late 2001.

This time, the Taliban is claiming to control virtually all of the country.

On the other hand, more than a dozen members of the Taliban’s “interim” cabinet – including the prime minister, his two deputies, and the foreign minister – are U.N. Security Council-sanctioned terrorists, subject to a travel ban and assets freeze.

In their letter to Guterres, Graham and Waltz said the U.N. “must resist the ease of short term thinking and consider the ramifications of seating a brutal regime that has within its ranks members of designated foreign terrorist organizations.”

The Risch bill calls on the U.S. ambassador to the U.N. to use the “voice, vote, and influence of the United States” to object to the issuing of U.N. credentials to any member of the Taliban, and “to ensure that no member of the Taliban may serve in a leadership position in any United Nations body, fund, program, or specialized agency.”

As CNSNews.com reported earlier, if Afghanistan’s seat at the U.N. is given to the Taliban the regime will also assume a leadership position in other agencies, including the Commission on Status of Women (CSW), the U.N.’s gender equality and women’s empowerment body.