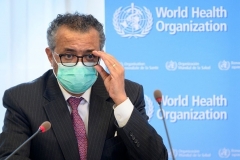 WHO Director-General Tedros Adhanom Ghebreyesus in Geneva on Monday. (Photo by Laurent Gillieron/Pool/AFP via Getty Images)

(CNSNews.com) – As the World Health Organization’s annual assembly got underway this week, Taiwan’s bid to participate was quickly shot down – again – despite appeals from the world’s leading democracies, including the Biden administration, which has made re-engagement with the U.N. health agency a priority.

Rather than assert his authority and invite Taiwan to participate at the World Health Assembly (WHA), WHO Director-General Tedros Adhanom Ghebreyesus punted the issue to member-states.

And so in Geneva on Monday, the WHA General Committee recommended against including on the agenda a proposal by Taiwan’s allies for it to be allowed to participate in the week-long virtual gathering as an observer.

For the fifth consecutive year, Taiwan’s government and people will not be represented at WHO’s primary decision-making body, at a time when the international community continues to grapple with a once-in-a-century coronavirus pandemic.

Calls for Taiwan’s inclusion had come from its handful of diplomatic partners, the Group of 7 leading industrialized democracies, and the WHO’s biggest funder, the United States.

Earlier this month Secretary of State Antony Blinken appealed to Tedros to invite Taiwan to take part as an observer, recalling that his predecessors had done so in past years.

But the request fell flat; The WHO secretariat said it was up to the 194 member-states of WHO to decide the matter, through a WHA resolution or decision adopted by a simple majority.

Making the shutout even more jarring for Taiwan is the fact its response to the pandemic was widely praised as being among the world’s best – despite its location just across the narrow strait from China, where the coronavirus first emerged in late 2019.

“Taiwan was the first to sound the alarm on COVID-19 in December 2019,” former U.S. Ambassador to the U.N. Nikki Haley tweeted on Monday. “Now, Communist China and the WHO are blocking Taiwan from participating at the World Health Assembly. China doesn’t care about fixing the crisis, it cares about control.”

Taiwanese Foreign Minister Joseph Wu expressed “deep displeasure” at Monday’s developments, but thanked members of the international community for supporting Taiwan’s bid, and stressed that it would continue to push for inclusion in the future.

Despite the WHO secretariat’s deflection to the membership, Wu expressed regret at what he called the secretariat’s “continued indifference to the health rights of Taiwan’s 23.5 million people.”

“By disregarding the calls for justice from the international community to allow Taiwan to contribute to global public health and medicine, WHO not only contravenes the lofty promise of leaving no one behind that the United Nations system repeatedly emphasizes, but also deprives other countries of the benefits of Taiwan’s extensive public health and antipandemic experience.”

Noting the focus of this year’s WHA on the coronavirus pandemic, Taiwan’s Health Minister Chen Shih-chung said there should not be a gap in global disease prevention, with Taiwan relegated to the sidelines.

“The world needs to share all available information and expertise in a collective fight against disease,” he said.

China’s foreign ministry welcomed the decision to exclude Taiwan, saying it “demonstrates the shared international commitment to the one-China principle, an overriding trend that cannot be challenged.”

It said the bid by Taiwan’s allies and a “handful” of conniving countries went against “the trend of history” and was doomed to fail.

Beijing, which views Taiwan as a renegade province and works actively to isolate it on the world stage, claims that the health needs of Taiwan’s people are being met.

“Based on the one-China principle, the central government of China has made appropriate arrangements for the Taiwan region’s participation in global health affairs,” Chinese ambassador Chen Xu told the WHA plenary on Monday.

He pointed to the fact Taiwanese health experts had been allowed to take part in WHO technical activities, and that the WHO secretariat has “briefed health experts in the Taiwan region several times on information of [the] COVID-19 pandemic.”

As it has done for years, Taiwan disputed those assertions.

“China has continued to falsely claim that appropriate arrangements have been made for Taiwan’s participation in WHO,” Wu said. “This wholly deviates from reality, contradicts international understanding, and violates the will of the Taiwanese people.”

He pointed out that the People’s Republic of China “has never governed Taiwan,” yet it continues to interpret U.N. resolutions in a “distorted” manner and to mislead the international community.

“Only the popularly elected government of Taiwan can represent the 23.5 million Taiwanese people in WHO and other international organizations,” Wu said.

President Trump last year gave notice for the U.S. to withdraw from the WHO, describing it as “China-centric.”

President Biden reversed the move immediately after taking office, a move which critics said should have been linked to demands for reform.

U.S. taxpayers have accounted for most of WHO’s budget since its establishment in 1948.