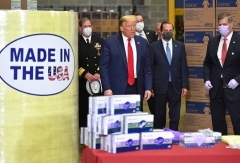 (CNSNews.com) – President Trump signed an executive order Thursday designed to facilitate the domestic production of strategic supplies needed to deal with the coronavirus pandemic. He had strong words for “globalists” who he said had put global interests ahead of those of the United States.

“We had a bunch of globalists,” Trump said during a visit to an Allentown, Pa.-based medical equipment distributor, Owens and Minor Inc. “They didn’t know what the hell they were doing.”

“My goal is to produce everything America needs for ourselves and then export to the world, and that includes medicines,” the president said. “It’s very important,” he continued, saying the U.S. has been “too reliant on other countries.”

The executive order signed en route to Pennsylvania delegates authority to the U.S. International Development Finance Corporation (DFC), under the Defense Production Act, to provide financing to industries producing “vital goods and services” at home. The White House says the goal is to secure domestic supply chains and make the U.S. “more independent, self-sufficient, and resilient.”

The DFC, created under the 2018 BUILD Act and amalgamating the roles of the former Overseas Private Investment Corporation and USAID’s Development Credit Authority, helps to promote private sector investment in the developing world and emerging markets.

“This federal agency normally invests in economic development projects in other countries,” Trump said. Then, apparently departing from his prepared remarks, he added, “I said, ‘How about investing in our country?’”

“We invest in other countries. Globalists – you know what a globalist is? They want the globe to do well, but they don’t care about us.”

“Now we want everybody to do well,” Trump said. “But we have to take care of America first. It’s got to be America first. And you know what? Other countries say their country first.  Why wouldn’t they do that?”

“But we didn’t do that,” he said. “We had a bunch of globalists. They didn’t know what the hell they were doing.”

Trump said that under the executive order, the DFC will now “also invest in our country, helping to bring vital factories, pharmaceutical producers, and most importantly, jobs back home, where they belong.”

He also spoke of restoring U.S. stockpiles such as respirator masks and ventilators in preparation for future pandemics.

“I’m determined that America will be fully prepared for any of the future outbreaks, of which we hope there’s going to be none.”

“We used to make our product,” he told Fox Business Network. “We went astray. I’ve been talking about this for 20 years. Probably it’s the number one reason I ran for president.”

“These stupid supply chains that are all over the world,” he said. “We have a supply chain where they’re made in all different parts of the world, and one little piece of the world goes bad and the whole thing is messed up.”

“I said, we shouldn’t have [international] supply chains, we should have them all in the United States,” he said. “We have the companies to do it.”

“For far too long the United States has relied on China to produce essential goods, such as medicine, medical supplies and personal protective equipment,” he said. “We can’t bet Americans’ health and security on the potential malign decisions of our strategic adversary, the Chinese Communist Party.”

DFC chief executive officer Adam Boehler said the executive order provides the agency with the tools needed “to re-shore critical industries in our country, advancing our national security and the security of allies all over the world.”

“This issue is not a partisan issue,” he said in a statement. “It’s an American issue, and I’m proud to support this administration’s vision for a stronger, safer America in these challenging times.”