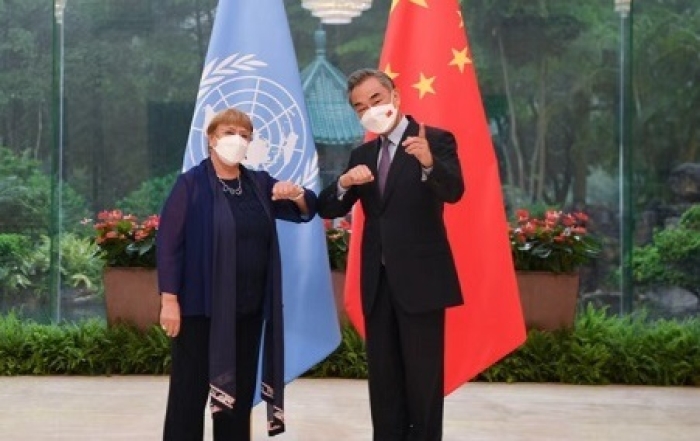 (CNSNews.com) – It was “a mistake” for the U.N.’s top human rights official to agree to a China visit under restrictive conditions set by the government, State Department spokesman Ned Price said on Tuesday, adding to criticism that has already prompted Beijing to accuse the U.S. and others of trying to sabotage the trip.

As U.N. High Commissioner for Human Rights Michelle Bachelet began her visit to a country where the U.S. says crimes against humanity and genocide are being committed, the BBC published a trove of leaked Chinese police images and documents relating to the mass incarceration of minority Muslims in Xinjiang.

It said the “Xinjiang Police Files” revealed, “in unprecedented detail, China’s use of ‘re-education’ camps and formal prisons as two separate but related systems of mass detention for Uyghurs.”

Bachelet is the first U.N. high commissioner for human rights to be allowed to visit China since 2005, in a trip that has taken longer than three-and-a-half years to arrange. Beijing vehemently denies allegations of incarceration and abuses in Xinjiang, and rights activists worry that it will ensure Bachelet sees and hears only what it wants her to see and hear.

Criticism has also been leveled at Bachelet herself for not releasing a long-finalized report by her Office of the High Commissioner for Human Rights (OHCHR) on the situation in Xinjiang, despite widespread appeals for her to do so.

Bachelet’s six-day visit began with a meeting with Foreign Minister Wang Yi, who according to the foreign ministry handed her an English-language copy of a book of discourses by Chinese President Xi Jinping on “respecting and protecting human rights.”

According to the foreign ministry account, “Bachelet congratulated China on its important achievements in economic and social development and human rights protection.”

The ministry says the OHCHR and China agreed that the visit would be “carried out in a closed-loop manner, with no traveling press.” Bachelet plans to hold a press conference at the end of the visit.

Price said the restrictions that Bachelet would be subject to left the U.S. with no expectation that China “will grant the necessary access required to conduct a complete, unmanipulated assessment of the human rights environment in Xinjiang.”

“We think it was a mistake to agree to a visit under these circumstances, where the high commissioner will not be granted the type of unhindered access, free and full access, that would be required to do a complete assessment, and to come back with a full picture of the atrocities, the crimes against humanity, and the genocide ongoing in Xinjiang.”

Earlier Tuesday, Chinese foreign ministry spokesman Wang Wenbin charged during a briefing that the U.S. and Britain had gone “to great lengths to disrupt and undercut the outcome” of Bachelet’s visit.

“Are they interested in human rights, or politicizing, weaponizing and instrumentalizing human rights issues?” he asked.

Wang said what the critics were really worried about was that international observers including Bachelet would be able “to see the real situation in Xinjiang, which will debunk the lies they have made up.” 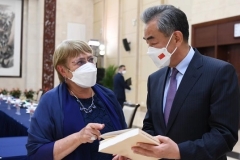 Asked if Bachelet would have any say in who she meets with in Xinjiang, Wang said only that she would have “extensive exchanges with people from all walks of life during her visit to China.”

He did not answer directly when asked if Bachelet would be able to speak, without supervision, to those who had previously been held in what Beijing calls “vocational centers.”

The leaked files published by the BBC, dating back to 2018, include police photographs of thousands of people allegedly detained in Xinjiang.

The documents include police manuals, personnel information, internment details for thousands of Uyghurs, and classified speeches by senior officials.

“The documents provide some of the strongest evidence to date for a policy targeting almost any expression of Uyghur identity, culture or Islamic faith – and of a chain of command running all the way up to the Chinese leader, Xi Jinping,” the BBC said.

The BBC said Zhao’s speech “heaps praise on the Chinese leader [Xi Jinping] for his ‘important instructions’ for the construction of new facilities and an increase in funding for prisons to cope with the influx in detainees necessary to reach that two million target.”

Asked about the claim that the chain of command responsible for atrocities in Xinjiang could go all the way to Xi himself, State Department spokesman Price said he would not want to “offer a tactical assessment of that.”

“But I will just say, in a system like the PRC’s, it would be very difficult to imagine that a systemic effort to suppress, to detain, to conduct a campaign of genocide and crimes against humanity, would not have the blessing, would not have the approval, of the highest levels of the PRC government.”

In response to a question about the leaked police files, Wang in Beijing dismissed their publication as “the latest example of the anti-China forces’ smearing of Xinjiang.”

“The lies and rumors they spread cannot deceive the world, nor can they hide the fact that Xinjiang enjoys peace and stability, its economy is thriving and its people live and work in peace and contentment.”