State Dept: ‘Jury is Still Out’ on Whether Iran Will Play ‘Constructive Role’ in Afghanistan 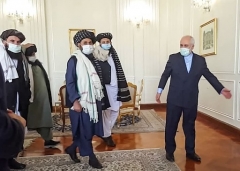 (CNSNews.com) – Iran has longstanding and controversial links with the Taliban and its al-Qaeda ally, but the Biden State Department on Wednesday expressed no explicit concerns about the regime in Tehran hosting talks with Taliban and Afghan officials.

“The jury is still out” on whether Iran was playing “a constructive role,” spokesman Ned Price told a briefing.

Asked whether the U.S. was hopeful Iran would play a positive role in a future Afghanistan, Price said he would not characterize the administration as either “hopeful” or “pessimistic.”

“What Iran is trying to do or in the – is in the process of doing by hosting this meeting may well be constructive,” he said. “I think the jury is still out.”

If Afghanistan is to have a “just and durable peace,” its neighbors would have to “play a constructive role,” Price said.

As the U.S. and coalition troop withdrawals from Afghanistan move ahead at a swift pace, Taliban fighters are seizing control of dozens of districts, most recently in Herat, Badghis and Nimroz provinces in the west, and Badakhshan province in the far northeast.

Russian officials were also involved, according to a Twitter post by the spokesman for the Taliban’s “political office” in Doha, Mohammad Naeem.

Iran’s foreign ministry portrayed its role as that of an honest broker – the Tehran Times referred to its “relentless efforts to broker peace” – although comments made by Zarif to the Taliban visitors gave a hint of where the regime’s sympathies lie.

“We are very proud that we remained alongside our Afghan brothers and sisters during the jihad of the Afghan people against the foreign invasion,” Afghanistan’s Tolo news agency quoted Zarif as saying.

The U.S. invaded Afghanistan in October 2001 after the Taliban regime refused to surrender al-Qaeda leaders following the 9/11 terror attack on America.

Despite sectarian differences, Shi’ite Iran’s links with the Sunni Taliban and al-Qaeda date back decades, as reflected in the 9/11 Commission report, Pentagon and State Department reports, and U.S. Treasury sanctions designations.

In the late 1990s, when the Taliban ruled most of Afghanistan, Iran threatened to attack the group after nine diplomats based at an Iranian consulate in Mazar-i-Sharif were killed during the Taliban’s capture of the northern city. It also armed the anti-Taliban opposition.

But Tehran shifted in the following years, colluding with the Taliban after its regime was toppled. The links were overseen by the Islamic Revolutionary Guard Corps - Qods Force (IRGC-QF), led by Qassem Soleimani until he was killed in a U.S. drone strike in January 2020.

The Treasury Department in 2010 sanctioned two senior Qods Force officials for supporting terrorism in Afghanistan and funneling Iranian assistance to the Taliban. It said the IRGC-QF “provides select members of the Taliban with weapons, funding, logistics and training.”

In 2014, the department sanctioned three IRGC-QF officers and one “associate” in relation to “Tehran’s use of terrorism and intelligence operations as tools of influence against the Government of the Islamic Republic of Afghanistan.”

U.S. concerns about Iran-Taliban links were also cited in a 2011 Treasury Department release, and in a 2017 speech by the department’s undersecretary for terrorism and financial intelligence.

According to the Pentagon, Iran’s IRGC-QF, from at least 2006, began to provide some Taliban elements with IEDs used against U.S. and coalition forces in Afghanistan (mirroring similar lethal support provided to Shi’ite militia fighting U.S. troops in Iraq).

“The Qods Force has provided limited and measured lethal support to select Afghan insurgent and terrorist groups since at least 2006,” the then-Defense Intelligence Agency director reported to Congress in 2010, saying Iranian-supplied weaponry had been found in Taliban arms caches.

A year later, then-U.S. commander Gen. David Petraeus told lawmakers that IRGC-QF-supplied rockets intercepted in Afghanistan had more than double the range and power of those more typically seen in the country.

By 2014 the Pentagon assessed that the Qods Force motivation in providing lethal aid to the Taliban was “to attrite [U.S.-led coalition forces] and expedite force withdrawal.”

And in a 2018 report, the Pentagon said, “Iran provides weapons, explosives, training, financing, and political support to the Taliban to counter the U.S. and Coalition military presence, combat ISIS-K, and position itself as an arbiter for peace talks.”

The 9/11 Commission report said al-Qaeda operatives received explosives training from the Iranians in the 1990s, and that Osama bin Laden “reportedly showed particular interest in learning how to use truck bombs such as the one that had killed 241 U.S. Marines in Lebanon in 1983.”

“The relationship between al-Qaeda and Iran demonstrated that Sunni-Shia divisions did not necessarily pose an insurmountable barrier to cooperation in terrorist operations.”

Although the commission found no evidence that Iran was aware of the planning for the 9/11 attacks, it cited “strong evidence that Iran facilitated the transit of al Qaeda members into and out of Afghanistan before 9/11, and that some of these were future 9/11 hijackers.”

In 2009 the Treasury Department designated for sanctions four al-Qaeda operatives based in Iran.

Iran for years also sheltered two senior al-Qaeda terrorists indicted by a federal grand jury for their roles in the 1988 U.S. embassy bombings in East Africa. One reportedly was assassinated in Tehran last August; the other remains at large and subject to a $10 million U.S. reward offer.

“Iran remained unwilling to bring to justice senior al-Qaeda (AQ) members residing in the country and has refused to publicly identify members in its custody,” said the State Department’s latest terrorism report, covering 2019.

“Iran has allowed AQ facilitators to operate a core facilitation pipeline through Iran since at least 2009, enabling AQ to move funds and fighters to South Asia and Syria.”