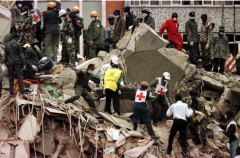 The aftermath of the Aug. 7, 1998 bombing of the U.S. Embassy in Nairobi. (Photo by AFP via Getty Images)

(CNSNews.com) – The Iranian regime rejected reports at the weekend that a senior al-Qaeda fugitive was assassinated in a joint U.S.-Israeli operation in Tehran last August, and it reiterated denials of any link with the terrorist group.

But U.S. officials have long contended that such a link exists, despite skepticism from some quarters that Shi’ite Iran would cooperate with the Sunni jihadists of al-Qaeda.

The reported death of Abu Mohammed al-Masri (aka Abdullah Ahmed Abdullah) is another significant accomplishment for the U.S. as it continues to hold accountable al-Qaeda terrorists blamed for mass-casualty attacks on U.S. targets.

The killing, reported first by the New York Times late last week, occurred on August 7, the 22nd anniversary of the bombing of the American embassies in Nairobi, Kenya, and Dar es Salaam, Tanzania. A total of 224 people, including 12 Americans, were killed in the near-simultaneous truck bombings, and more than 4,000 people were injured.

Masri’s death leaves just one key suspect in the 1998 bombing plot at large, the others all having been killed, or serving life prison terms in the U.S.

The remaining suspect, Saif al-Adl – like his fellow Egyptian and close associate Masri before his death – is believed to be based in Iran.

The State Department offered 10 million rewards for information on the two remaining East Africa embassy bombing suspects -- one of whom was reportedly killed in Iran in August. (Image: State Department)

Masri and Adl were considered to be key figures in the leadership hierarchy of the terrorist network. Masri was described as the group’s number two, and Adl is also understood to be in the line of succession. According to U.S. court documents, both sat on al-Qaeda’s top decision-making body, the majlis al shura.

Responding to the Times report, Iranian foreign ministry spokesman Saeed Khatibzadeh denied that any al-Qaeda officials were present in Iran, dismissing the claims as “Hollywood-style scenarios” fabricated by the U.S. and Israel.

He said al-Qaeda’s existence was a result of wrongful U.S. policies in the region, and in order to dodge responsibility for al-Qaeda’s activities, the U.S. and Israel periodically try to  “draw a link between Iran and such groups through falsification and the leakage of fabricated information to the media.”

“Such accusations are undoubtedly part of the full-fledged economic, intelligence and psychological war against the Iranian people, and the media should not act as a tribune for spreading the White House’s purposeful lies about Iran,” Khatibzadeh said.

A brief Mehr news agency report on August 8 said unknown assailants on a motorcycle had fired four shots at a vehicle carrying a Lebanese history professor “Habib Daoud,” 58, and his daughter “Maryam,” 27, in Tehran’s upscale Pasdaran neighborhood, killing them both.

According to U.S. officials cited in the new reports, the “Lebanese” pair were in fact Masri and his daughter, Maryam, herself a key al-Qaeda operative and the widow of bin Laden’s son, Hamza bin Laden, killed in a U.S. counterterrorism operation in the Pakistan/Afghanistan region, announced by the Trump administration in September last year.

During a period of heightened tensions between the U.S. and Iran last year, some U.S. lawmakers expressed concern that the administration was touting Iran-al-Qaeda links to justify using the 2001 Authorization for the Use of Military Force to carry out an attack on Iran.

Passed after 9/11, the AUMF remains the main statutory authority for military action against al-Qaeda and associated groups.

“There is no doubt there is a connection between the Islamic Republic of Iran and al-Qaeda. Period. Full stop,” Secretary of State Mike Pompeo told the Senate Foreign Relations Committee in April last year. “The factual question with respect to Iran’s connections to al Qaeda is very real,” he said. “They have hosted al Qaeda. They have permitted al-Qaeda to transit their country.”

Amid classified briefings to lawmakers, Sen. Tim Kaine (D-Va.) was quoted at the time as fretting that administration officials “are looking to bootstrap an argument to allow the president to do what he likes without coming to Congress, and they feel the 2001 authorization will allow them to go to war with Iran.”

In fact evidence of links go back decades. After al-Qaeda attacked America in 2001, the 9/11 Commission report recounted that al-Qaeda operatives traveled to Iran and the Hezbollah-controlled Beqaa Valley in Lebanon in the 1990s for training in explosives.

Significantly, it said Osama bin Laden “reportedly showed particular interest in learning how to use truck bombs such as the one that had killed 241 U.S. Marines in Lebanon in 1983. The relationship between al-Qaeda and Iran demonstrated that Sunni-Shia divisions did not necessarily pose an insurmountable barrier to cooperation in terrorist operations.”

The report said al-Qaeda detainees at Guantanamo Bay “have described the willingness of Iranian officials to facilitate the travel of al Qaeda members through Iran, on their way to and from Afghanistan.”

“[T]here is strong evidence that Iran facilitated the transit of al Qaeda members into and out of Afghanistan before 9/11, and that some of these were future 9/11 hijackers,” it said – but also noted there was no evidence Iran was aware of the planning for the 9/11 attacks.

Most of the terrorists implicated in the 1998 East Africa embassy bombings have been brought to justice: Four were convicted in 2001 and are serving life prison terms in the U.S., and the others have been killed (Bin Laden, his second-in-command Mohammed Atef, and three other men, killed by U.S. or Somali forces in East Africa in 2007, 2009, and 2011.)

The last two at large, Masri and Adl, were indicted by a federal grand jury in 1998 for their involvement in the bombings.

After the attack they moved to Iran where, according to the State Department, they lived under the protection of the Islamic Revolutionary Guard Corps for several years, before being placed under house arrest in 2003.

In 2015, al-Qaeda kidnapped an Iranian diplomat in Yemen, and in exchange for his freedom, the regime freed Masri and Adl. According to subsequent U.N. Security Council and State Department terrorism reports, they remained in Iran, whose authorities have been unwilling to bring them to justice.

The department has been offering rewards of $10 million for information on both Masri (Abdullah) and Adl.