Images of President Xi Jinping and past CCP leaders are displayed above a row of pandas in a Beijing shop window. (Photo by Greg Baker/AFP via Getty Images)

(CNSNews.com) – Responding to Monday’s announcement of nominees for top national security posts in a Biden administration, Sen. Tom Cotton (R-Ark.) expressed concern that those named may “roll back all of the progress made against Beijing over the past four years.”

“As [former Defense Secretary] Bob Gates said, Joe Biden has ‘been wrong on nearly every major foreign policy and national security issue over the past four decades,’” said Cotton, a leading critic of the Chinese Communist Party (CCP) in Congress. “Now he’s surrounding himself with panda huggers who will only reinforce his instincts to go soft on China.”

“John Kerry will jet off to Beijing in pursuit of a climate accord with the world’s biggest polluter, the Chinese Communist Party,” commented Cotton. “If Xi Jinping plays along, he’ll demand concessions. And we know what that means: more shuttered factories in the U.S., more hot air from Beijing.”

“What else will Biden, Kerry, & Blinken give away to ‘smooth relations’ with Beijing?” he asked. “Will they stop efforts to arrest Chinese spies on our campuses? Rescue China’s electronic surveillance company, Huawei? Weaken export controls? Delay arms sales to Taiwan? Reduce U.S. naval operations in the South China Sea? Prohibit our military commanders from speaking frankly about the [People’s Liberation Army]? Halt the development of U.S. intermediate-range missiles for deployment to the Pacific? It’s all on the table.”

“America will be in deep trouble if the same officials who oversaw the Obama/Biden administration’s disastrous China policy enter office and roll back all of the progress made against Beijing over the past four years.”

Cotton’s “panda huggers” comment drew some cutting responses on Twitter, with some critics suggesting the term amounted to veiled racism, and others asking how anyone could not want to hug a “cute and cuddly” panda.  (China has censored images of Winnie the Pooh, after unflattering comparisons with President Xi Jinping.)

In Beijing, foreign ministry spokesman Zhao Lijian declined to comment on the news that Blinken could succeed Secretary of State Mike Pompeo – who has become a reviled figure for the CCP – telling a daily briefing, “we don’t comment on the U.S. internal affairs.”

Zhao did say that China was “ready to strengthen communication with the United States, expand cooperation, manage differences, and work for sound and stable development of China-U.S. ties.”

By contrast, it quoted a couple of Chinese academics as saying Blinken at the helm of the State Department would bode well for relations.

“Given his previous rhetoric on China-related issues and his past experience, his stance is softer than that of the current administration, which is likely to create a positive environment for the China-U.S. relationship,” Renmin University associate professor Diao Daming told the paper, adding that Blinken “won’t be as provocative as the Trump administration on some of the issues of concern, like the Taiwan question.”

However Li Haidong, a professor at the Institute of International Relations at China Foreign Affairs University, said while a Biden administration may adopt a more “civilized” approach towards China “it won’t change the nature of the longstanding rivalry between the two countries.”

In a separate editorial, Global Times said it remains to be seen how Biden would deal with the legacy of Trump’s economic “decoupling” policies, which it said would be “a major test for the next U.S. administration.”

“Since closer cooperation remains the best path to mutual economic success, we hope that President Biden can bring bilateral relations back on track by properly handling what he will inherit.”

Blinken told a U.S. Chamber of Commerce event in September that “trying to fully decouple” from China was “unrealistic and ultimately counter-productive.” 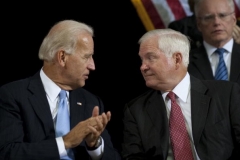 As referenced by Cotton, Gates wrote in his 2014 memoir that Biden had “been wrong on nearly every major foreign policy and national security issue over the past four decades.”

The full excerpt was: “He’s a man of integrity, incapable of hiding what he really thinks, and one of those rare people you know you could turn to for help in a personal crisis. Still, I think he’s been wrong on nearly every major foreign policy and national security issue over the past four decades.”

After Biden launched his campaign for the White House, Gates said in May last year that he stood by those comments.