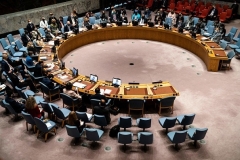 (CNSNews.com) – An attempt by the U.N. Security Council to pass what would have been the first-ever standalone resolution linking climate change and the council’s primary mandate of maintaining international peace and security was torpedoed Monday by Russia.

Russia used its veto power to kill the resolution drafted by Ireland and Niger. India also voted “no” while China abstained.

The draft stressed the need for a “comprehensive, whole of U.N. approach to address climate change and its effects,” asked the secretary-general to “integrate climate-related security risk as a central component into comprehensive conflict-prevention strategies,” and called for the security implications of climate change to be incorporated into the analyses and activities of U.N. peace missions.

For years, U.N. member-states have wrestled over whether climate change is worthy of the attention of the Security Council – whose primary responsibility under the U.N. Charter is “international peace and security” – or whether the issue should be left to dedicated entities such as the U.N. Framework Convention on Climate Change (UNFCCC).

The Security Council carries far more weight, however, and at a time when climate change is high on many governments’ agendas, the sponsors hoped for success, buoyed by the fact the draft resolution was co-sponsored by 113 of the 193 U.N. member-states.

But, explaining the veto decision, Russian Ambassador Vassily Nebenzia said his government was “against creating a new area of the council’s work, which establishes a generic, automatic connection between climate change and international security, turning a scientific and socio-economic issue into a politicized question.”

“Positioning climate change as a threat to international security diverts the attention of the council from genuine, deep-rooted causes of conflict.”

Nebenzia took aim at Western countries, saying some were quick to blame “greenhouse gas emissions, as well as the sun and the moon” for a dire situation directly arising from their own colonial policies or military interventions in other countries’ internal affairs.

U.S. Ambassador to the U.N. Linda Thomas-Greenfield scolded Russia for blocking the initiative.

“By vetoing this resolution, Russia has stopped the world’s most important body for maintaining international peace and security from taking a small, practical, and necessary step to combat the impacts of climate change,” she said.

Thomas-Greenfield said that while Russia may have blocked this one resolution, “our global movement cannot be stopped. The momentum will only build from here.” 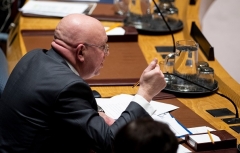 Russian Ambassador to the United Nations Vassily Nebenzia speaks in the Security Council. (Photo by Johanmnes Eisele/AFP via Getty Images)

Several council members expressed frustration with Russia’s use of the veto that it enjoys as one of the five permanent members.

“The veto is an anachronism,” Irish Ambassador Geraldine Byrne Nason told reporters afterwards. “This is a Security Council which sorely needs reform. We regret the use of the veto in all circumstances, and we absolutely regret its use today. Its use is a stain on the legacy of the council.”

She and other supporters of the resolution underlined that it was co-sponsored by 113 U.N. member-states. Nebenzia countered, however, that the other 80 members of the world body had not signed up to it.

“The international community is deeply divided on the issue of climate,” he said. “What we see now is an anti-democratic attempt to ignore the opinion of those 80 members who did not support the draft and to impose the position of climate activists on them.”

Russia’s mission in a statement stressed that Russia was onboard global climate efforts and was pursuing a goal of achieving carbon neutrality by 2060.

However, it said, the draft resolution was “coercing the council to take a one-dimensional approach to conflicts and threats to international peace and security, i.e. through the climate lens.”

The Security Council has held seven thematic debates on climate change since 2007, with many U.N. member-states, including those from small island developing nations, argued that the adverse effects of climate change could aggravate existing threats to international peace and security. Some noted that the council has considered other non-traditional security threats, such as HIV-Aids.

Others, led by Russia (and China to a lesser degree), countered that climate change does not fall within the council’s mandate – the same argument Nebenzia made on Monday.

During a 2011 debate on the topic, the council agreed on a presidential statement – a considerably weaker Security Council action than a resolution, but to date still the only time the council has produced a thematic document specifically on the issue.

The presidential statement reaffirmed that the UNFCCC “is the key instrument for addressing climate change,” but also expressed the council’s “concern that possible adverse effects

of climate change may, in the long run, aggravate certain existing threats to international peace and security.”

Ahead of a July 2020 debate, Germany pursued a thematic resolution on climate change and security. The initiative fizzled out, after running into opposition not just from Russia and China but also from the Trump administration.