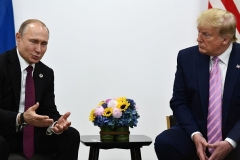 (CNSNews.com) – President Trump’s decision to withdraw from the Open Skies Treaty is highlighting again the contrast between his response to Russian violations and those of his predecessors, as well as European allies.

Russia has been violating the agreement, which was designed to build trust between former Cold War foes via unarmed observation flights, from the outset, according to the State Department’s top arms control and international security official.

Findings of Russian non-compliance were recorded in the very first State Department report on OST compliance, issued three years after the treaty’s entry into force in 2002, and have appeared in various forms over the years since, U.S. Assistant Secretary Chris Ford said via teleconference after the announcement.

Concerns about Russian non-compliance over the years prompted congressional hearings, resolutions, letters from lawmakers to the administration, and the insertion of amendments into defense spending bills.

When questioned by lawmakers about Russian violations, Obama administration officials typically defended the treaty’s value, and said that when issues arose the U.S. worked with the Russians to resolve them.

The last compliance report under Obama, in April 2016, said, “Russia continues not to meet its treaty obligations to allow effective observation of its entire territory, raising serious compliance concerns,” adding that U.S. efforts to discuss the problems “have not resolved any of the compliance concerns.”

Compliance reports under Trump have continued to outline repeated attempts to resolve compliance concerns with Russia, to no avail.

The OST allows 34 countries to carry out observation flights, using unarmed military aircraft, over each other’s entire territory and to collect imagery. More than 1,500 flights have taken place under the treaty, which is intended to enhance trust by assuring countries about each other’s military activities.

But Russia, Ford said, has long been sending a different message.

“What it has been saying is yes, you can fly anywhere you want and look at anything you like at any time – except for the things we don’t wish you to see,” he said.

The U.S. says Moscow has placed varying restrictions on Western flights over certain areas, such as Chechnya and the strategic exclave of Kaliningrad, and has used the agreement in a bid to advance its spurious claims regarding Ukraine’s Crimea and the separatist Georgian regions of Abkhazia and South Ossetia.

Ford said Russia was suspected of abusing the treaty in other ways too.

“Russia may be using imagery that is collected from Open Skies flights to support its new doctrine of targeting U.S. – and, I should add, European – critical infrastructure targets with conventionally armed precision-guided missiles,” he said.

(Russia’s military doctrine updated in 2015 highlights the use of high-precision conventional missiles as a key element of its “strategic deterrence,” in response to NATO’s military buildup and eastwards expansion.)

The U.S. decision to withdraw follows a months-long process of review and consultation with allies, Ford said. It will become effective in six months’ time, although the administration has left open the possibility that should Russia return to compliance, the decision could be reversed.

The chairmen of the House Foreign Affairs and Armed Services committees, Eliot Engel (D-N.Y.) and Adam Smith (D-Wash.), accused the administration of bypassing congressional notification requirements, and credited the OST with having “brought unprecedented openness and transparency between participating countries.”

The planned exit is in keeping with Trump’s declared determination to withdraw from agreements deemed no longer to be in the U.S. interest. It follows the departure from the Obama-era Iran nuclear deal and Paris climate accord, and last year’s withdrawal from the 1987 Intermediate-Range Nuclear Forces (INF) treaty.

Next in the spotlight: the New START treaty, which limits U.S. and Russian nuclear warheads and deployed missiles, bombers and launchers, and is due to expire next February.

The administration has not committed to extending it, instead proposing a new three-way pact that includes China – whose nuclear stockpile is not covered by New START. 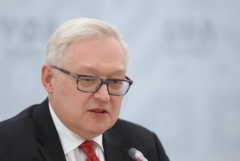 Russian deputy foreign minister Sergey Ryabkov, in a Channel One television interview, likened the issue to the coronavirus pandemic, which Russia will have no choice but to weather.

“This is a country that disregards international law and its own commitments in various fields,” Ryabkov said of the U.S. “The Open Skies Treaty probably was an obstacle for the U.S. and there will be other agreements which the U.S. would like to abandon. This is like a virus, like COVID-19. We cannot overcome it but we can survive it.”

Ryabkov said Moscow was “analyzing various options” but was “in no hurry.”

After discussing the issue on Friday, NATO allies declared that all alliance members were in full compliance with their OST obligations, and recalled that NATO has been calling on Russia to return to full compliance since 2014.

NATO did not pass judgment on Washington’s plan to withdraw, but said, “Russia’s return to compliance is the best way to preserve the benefits of the Treaty.”

Separately, 11 European foreign ministries expressed their dismay over the U.S. announcement, even though they said they shared Washington’s concerns about Russia’s behavior.

The 11 governments said they continue to view the OST as “a crucial element of the confidence-building framework” and would continue to implement it. They called on Russia to lift flight restrictions, notably over Kaliningrad.

German Foreign Minister Heiko Maas said last week that even though Russia was not honoring the treaty, “from our point of view that does not justify withdrawing from the treaty.”

He said Germany and like-minded partners would use the six-month notice period “to encourage the U.S. government to rethink its decision,” and call on Russia to resume full implementation.