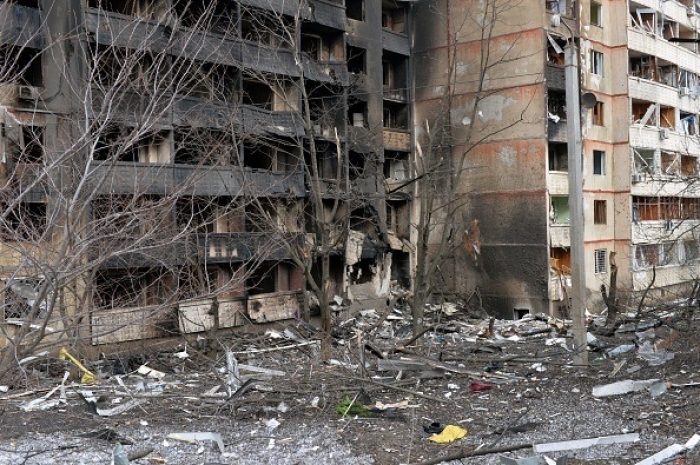 The remains of an apartment building destroyed by Russian shelling in Ukraine’s second largest city, Kharkiv. (Photo by Sergey Bobok/AFP via Getty Images)

(CNSNews.com) – Secretary of State Antony Blinken on Thursday backed President Biden’s view on war crimes being committed by Russia in Ukraine, as Moscow continued to accuse Ukrainian forces of responsibility for an attack on a theater sheltering hundreds of people displaced by the fighting.

“Russia continues to attack civilian sites, including – this week alone – a hospital, three schools, a boarding school for visually impaired kids in the Luhansk region of Ukraine,” Blinken told reporters at the State Department.

“Yesterday Russian forces bombed a theater in Mariupol, where hundreds of people had been taking shelter,” he said. “The word ‘children’ had been written in Russian in giant white letters on the pavement outside the building, so that you could know from the air that there were children inside.”

“During daylight on March 16, Russian aviation carried out no missions involving strikes on ground targets within Mariupol limits,” the TASS state news agency quoted the ministry as saying.

It accused a controversial far-right Ukrainian militia of deliberately blowing up the building as a “provocation,” providing no evidence but offering vague references to “verified information” and claims made by “refugees that escaped Mariupol.” 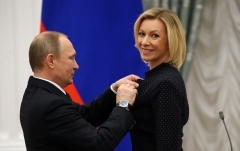 “The Russian armed forces are not bombing the cities and everyone is well aware of this,” she said. “No matter how many video shots NATO compiled and no matter how many fake pictures are currently circulated, the truth will eventually emerge.”

An information battle is raging along with the conflict in Ukraine, with Russian state media outlets promoting Kremlin talking points about Putin’s “special military operation,” the “neo-Nazis” in Kyiv, and a “genocide” against the population of the Russian-backed entities in eastern Ukraine.

Belying images seen around the world of bombed-out apartment blocks, stores and civilian facilities, TASS reports carry boilerplate defense ministry assertions to the effect that “Russian troops are not targeting Ukrainian cities, but are limited to surgically striking and incapacitating Ukrainian military infrastructure. There are no threats whatsoever to the civilian population.”

At a background briefing on Thursday, a senior Pentagon official said Russia was continuing “to blame stuff they’re doing on the Ukrainians or to accuse the Ukrainians of doing stuff that they [the Russians] haven’t done yet.”

The official assessed that the Russian narratives were not finding much “purchase” beyond its borders, but that inside Russia, “anecdotally, we see their narratives having more of an effect.”

“But then again, they’ve shut down the independent media. The only thing available to most Russians now is state media, and so you would expect that those narratives would be more widely consumed, and even more widely believed,” the official said.

At his press briefing, Blinken noted that Biden voiced his opinion a day earlier that “war crimes have been committed in Ukraine.”  (Biden in fact said he viewed President Vladimir Putin as a “war criminal.”)

“Personally, I agree,” Blinken said. “Intentionally targeting civilians is a war crime. After all the destruction of the past three weeks, I find it difficult to conclude that the Russians are doing otherwise.”

Asked if the U.S. could ever have normal relations with Russia while Putin remains in power, Blinken said the U.S. focus now was on bringing the war to an end.

“I don’t want to speculate about the future, but there’s going to have to be, one way or another, accountability for this war of aggression.”

The State Department is documenting Russian actions in Ukraine to determine whether they amount to war crimes.

“We’ll make sure that our findings help international efforts to investigate war crimes and hold those responsible accountable,” Blinken said.

Blinken warned again that the U.S. was seeing indications Russia may be preparing a false-flag chemical weapons attack.

“We believe that Moscow may be setting the stage to use a chemical weapon, and then falsely blame Ukraine to justify escalating its attacks on the Ukrainian people,” he said.

The Russian state has been accused of using chemical weapons in attempts to assassinate dissidents – including Alexander Litvinenko in 2006, Sergei Skripal in 2018 and Alexei Navalny in 2020 – and has been implicated in chemical weapons attacks in Syria blamed on its ally, the Assad regime.

In recent days it has been spreading allegations that the Pentagon has collaborated with Ukraine in developing biological and chemical weapons – claims rejected by the Pentagon and State Department.

On Thursday night the Russian Embassy in Washington, D.C., used its social media accounts to advance its narrative.

“The Russian Federation is fully aware that radical Ukrainian groups under the control of representatives of American special services have prepared several potential scenarios of the use of toxic chemicals in order to carry out various types of provocations against civilians,” it said in a Facebook post.

“The objective of such inhumane actions is to accuse Russia of the use of chemical weapons against the civil population of Ukraine. Such information can’t but raise serious concern, taking into account that the United States hasn’t yet destroyed its national stocks of chemical warfare agents.”

Earlier, the embassy accused U.S. media outlets of spreading disinformation about Ukraine, and recommended that “those who are really interested in truthful information” use the resources of the embassy and of the Russian foreign and defense ministries.