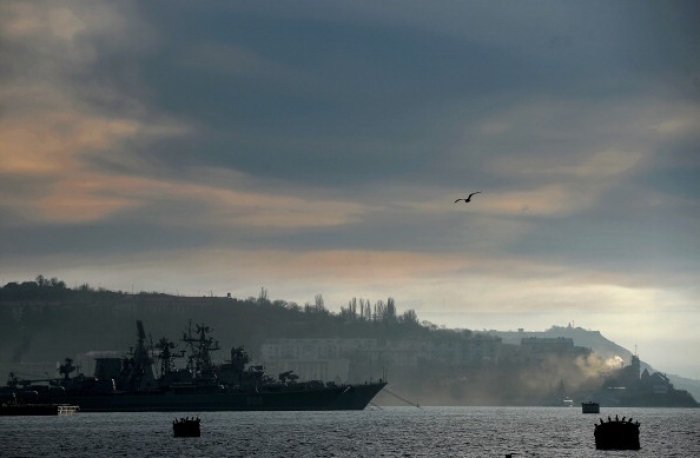 A Russian Navy frigate docked off the port of Sevastopol in Russian-occupied Crimea. (Photo by Filippo Monteforte / AFP via Getty Images)

(CNSNews.com) – A series of powerful blasts at a Russian air base in Crimea on Tuesday sparked speculation that Ukrainian forces may for the first time have struck a blow against the Russians on the strategic peninsula, which the Kremlin annexed in 2014.

Neither the Russian nor Ukrainian defense ministries confirmed that, however.

The Russian ministry claimed the explosions at the Saki air base, which according to local officials killed one person and injured nine others, resulted from the detonation of munitions stored at the site, and that no aircraft had been damaged.

RIA Novosti quoted a defense ministry source as attributing the incident to “a violation of fire safety rules.”

Ukraine’s defense ministry, in an apparently tongue-in-cheek comment alluding to that claim, said on its Facebook page that while it could not determine the cause of the blasts and fire, it “once again reminds of the rules of fire safety and the prohibition of smoking in unidentified places.”

According to Ukrainian media outlets, Russian forces have used the Saki air base, located on the Black Sea coast northwest of Simferopol, to carry out airstrikes on southern Ukraine since the war began in February.

Ukraine’s military has typically remained mum when Russia has accused it of responsibility for explosions or fires inside Russian territory near the border with Ukraine. Despite having carried out a full-scale invasion of its neighbor for the past five-plus months, Moscow has warned that if Ukraine shells targets on its territory, it would respond by attacking its “decision-making centers,” such as Kyiv.

Crimea is a different case, however. While Russia incorporated the peninsula into the Russian Federation in 2014 after locals in a referendum backed the move by a large margin, Kyiv has never accepted that outcome, and refers to Crimea as “temporarily occupied.”

Most of the international community, too, does not recognize the Russian annexation, and Western nations imposed sanctions on Moscow in response to the move.

Ukrainian President Volodymyr Zelenskyy on Tuesday night devoted his nightly message to the nation to the subject of Crimea – although without directly mentioning the explosions.

“Today, there is a lot of attention to the topic of Crimea. And rightly so,” he said. “Because Crimea is Ukrainian, and we will never give it up.”

Zelenskyy said Russia has “brought large-scale repression, environmental problems, economic hopelessness and war to Crimea,” and that the Black Sea region will never be safe while the occupation continues.

“This Russian war against Ukraine and against the entire free Europe began with Crimea and must end with Crimea – with its liberation.”

If the cause of Tuesday’s explosions was Ukrainian projectiles of some variety, it would not have been carried out using the precision-guided rocket HIMARS systems provided by the U.S.

Although that equipment has been used to great effect elsewhere in the fighting zone in eastern Ukraine, the Saki air base is well beyond range of the munitions supplied by the U.S. for use in the truck-based HIMARS – about 40 miles maximum. The base lies at least 120 miles from the nearest Ukrainian-held territory.

(Depending on the munitions used, the HIMARS platform can achieve a firing range of up to 190 miles. But the Guided Multiple Launch Rocket System, or GMLRS, munitions supplied by the U.S. are those with a shorter-range capability.)

Still, the GMLRS being supplied by the U.S. “are having a very profound effect,” U.S. Undersecretary of Defense for Policy Colin Kahl said at a Pentagon briefing on Tuesday.

“This is a 200-pound warhead, it’s kind of the equivalent of an airstrike, frankly – a precision-guided airstrike,” he said. “These are GPS-guided munitions. They've been very effective in hitting things that previously the Ukrainians had difficulty hitting reliably.”

Additional munitions for HIMARS are among the items included in the latest U.S. security assistance package to Ukraine, valued at $1 billion.

Since the invasion began, the U.S. has provided about $9.1 billion in security assistance to Kyiv, through Ukrainians through presidential drawdown authority and the Pentagon funding program known as the Ukraine Security Assistance Initiative.

White House Press Secretary Karine Jean-Pierre did not answer directly when asked on Tuesday if the U.S. considers Crimea to be a legitimate target for Ukrainian attacks carried out with U.S.-supplied weapons.

She did say that the U.S. supports Ukraine’s efforts to protect its sovereignty and territorial integrity. But when asked again, specifically, if Crimea would be a legitimate target when using U.S.-provided equipment, she said she had nothing more to offer.

The reporter asking the question pointed out that the Pentagon has in the past said weapons it supplies should not be used to attack Russian territory. (That was a commitment specifically sought from and given by Kyiv when the U.S. first agreed to supply HIMARS.)

Crimea is not, however, “Russian territory,” according to the U.S. government.  Officials have repeatedly stated that the U.S. does not recognize Russia’s seizure of Crimea.