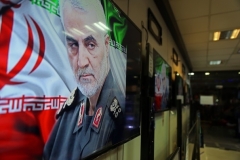 An image of Qassem Soleimani is seen on a television set in a store in downtown Tehran on January 5, two days after he was killed in a U.S. drone strike in Baghdad. (Photo by Majid Saeedi/Getty Images)

The report, drawn up by Agnes Callamard, the U.N.’s “special rapporteur on extrajudicial, summary or arbitrary executions,” said the U.S. government has provided no evidence that Soleimani had been “planning an imminent attack against U.S. interests, particularly in Iraq, for which immediate action was necessary and would have been justified.”

It had also provided no evidence of the need to target Soleimani while in a third country – Iraq – she said, “or that the harm caused to that country was proportionate to the harm allegedly averted.”

“Major General Soleimani was in charge of Iran military strategy, and actions, in Syria and Iraq,” Callamard wrote. “But absent an actual imminent threat to life, the course of action taken by the U.S. was unlawful.”

Soleimani was head of the Qods Force, the Islamic Revolutionary Guard Corps (IRGC) unit responsible for operations abroad, implicated in the deaths of hundreds of American troops in Iraq, and in terror attacks and plots on several continents.

Described by President Trump in his State of the Union speech as “the world’s top terrorist,” he was killed in a January 3 U.S. airstrike on a vehicle near Baghdad airport. Killed with him were nine others – the leader and four other members of a Qods Force proxy militia in Iraq, and four IRGC officials.

Callamard said that, based on evidence provided by the U.S. to date, “the targeting of General Soleimani, and the deaths of those accompanying him, constitute an arbitrary killing for which, under [international human rights law], the U.S. is responsible.”

Due to “insufficient evidence provided of an ongoing or imminent attack,” she said, the drone strike was a violation of an article of the U.N. Charter relating to “the threat or use of force against the territorial integrity or political independence of any state.”

In the aftermath of the strike, Trump and senior administration officials said the U.S. had intelligence to the effect that Soleimani was planning an imminent attack against U.S. interests, with Trump referring to threats to four U.S. embassies.

Secretary of State Mike Pompeo, while saying the administration did not know exactly where and when the attacks were planned to have taken place, also stated, “We had specific information on an imminent threat, and those threats included attacks on U.S. embassies.”

Trump critics seized on Defense Secretary Mark Esper’s acknowledgement on January 12 that he had not seen specific evidence “with regard to four embassies” being under threat of attack. On the same day Esper also said, “I think that the attack was days away” and, “It was going to be on multiple sites.”

In the months leading up to Soleimani’s death, Iraqi Shi’ite militias that he oversaw were accused of carrying out numerous attacks on military bases in Iraq where U.S. troops are stationed.

Pompeo and other U.S. officials over that period warned the Iranian regime that any such actions harming Americans would draw a decisive response.

On December 27, the Qods Force-backed militias crossed that line, with a rocket attack that killed an American contractor and wounded four U.S. servicemen at a base in Kirkuk – an attack which the Pentagon accused Soleimani of orchestrating. The drone strike came one week later.

In her report, however, Callamard argued against any attempt to justify the killing of Soleimani on the basis of previous actions, writing that, “Under the U.N. Charter, armed attacks for purposes of retaliation are never permissible.”

The Trump administration designated the IRGC as a “foreign terrorist organization” in April last year, the first time the U.S. has added an entity belonging to a foreign government to the blacklist.

(The Bush and Obama administrations had also designated Soleimani three times between 2007 and 2011 for terror-related activity. Kata’ib Hezbollah, the militia whose members were killed with Soleimani in the strike, has been a U.S.-designated FTO since 2009.)

Terror designations notwithstanding, Callamard described the strike against Soleimani as “the first known incident in which a state invoked self-defense as a justification for an attack against a state-actor, in the territory of another state.”

“The international community must now confront the very real prospect that states may opt to ‘strategically’ eliminate high-ranking military officials outside the context of a ‘known’ war, and seek to justify the killing on the grounds of the target’s classification as a ‘terrorist’ who posed a potential future threat,” she wrote.

“In other words, the targeted killing of General Soleimani, coming in the wake of 20 years of distortions of international law, and repeated massive violations of humanitarian law, is not just a slippery slope. It is a cliff.”

“Special rapporteurs” are appointed by and report to the Human Rights Council, but operate independently of the U.N.

Callamard, a French human rights expert who is also director of Columbia University's Global Freedom of Expression initiative, was appointed to that role in 2016.

Iran, which retaliated for the death of Soleimani by launching missiles at two Iraqi bases where U.S. forces were stationed, recently issued arrest warrants for Trump and 35 other unnamed U.S. officials over the killing.