Rockets are fired from Hamas-controlled Gaza City towards Israel on Monday. (Photo by Mahmed Hams/AFP via Getty Images)

(CNSNews.com) – “The Israeli government doesn’t want Palestinians to exist” and wants to “expel them all,” Rep. Rashida Tlaib (D-Mich.) charged on Monday, accusing the Jewish state of “apartheid” and “ethnic cleansing” and challenging the Biden administration and Democrat establishment to change their stance on conditioning U.S. aid to Israel.

Tlaib, appearing on the Mehdi Hasan Show on the video streaming service Peacock TV, suggested younger Democrats are moving away from the party’s traditional pro-Israel position.

The remarks from the Palestinian American lawmaker came on a day of violence in Israel, including fresh skirmishes between police and Palestinians in the Temple Mount compound and al-Aqsa mosque, the firing of rockets by Hamas in the Gaza Strip into Israel – some targeting Jerusalem for the first time in seven years – and retaliatory airstrikes in Gaza.

Hasan pointed out that President Biden and many Democrats have opposed making U.S. aid to Israel conditional on its government’s policies.

He noted that during the Democratic primaries Sens. Bernie Sanders and Elizabeth Warren, and former South Bend, Ind. Mayor Pete Buttigieg had all voiced support for setting conditions for aid to Israel, but Biden had opposed it.

“Hundreds of your [Democratic] colleagues have spoken up against it,” he said. “Is conditioning of aid even on the table?”

“It has to be on the table,” Tlaib replied. “And look, by not conditioning, and having what we call unconditional funding to an apartheid state, one that is practicing ethnic cleansing and so much more, we are becoming hypocrites, and – and – and saying that we don’t support the value of human dignity, we don’t support international human rights.”

“And I know this is not the first time that my country has been on the wrong side of history. I know that,” she continued. “This won’t happen unless we organize in communities, understand the … intersectionality of many of our work around movement, not only for black lives but against all forms of oppression.”

“And so, Mehdi, it’s very clear to me that we cannot take it off the table,” Tlaib said. “It has to remain. The fact of the matter is, the Israeli government doesn’t want Palestinians to exist. They don’t want to co-exist with their neighbors. They want to basically expel them all, to get rid of them all, and again on our own dime.” 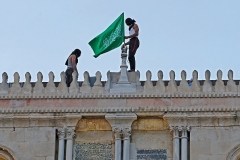 Palestinians hoist the flag of the Hamas terrorist group on Monday atop Jerusalem's al-Aqsa mosque, the third-holiest site in Islam. (Photo by Ahmad Gharabli/AFP via Getty Images)

Tensions in Jerusalem have been escalating for weeks, with a looming Israeli Supreme Court decision in a case that could result in six Palestinian families being evicted from their homes in the Sheikh Jarrah neighborhood of east Jerusalem – the culmination of a decades-old legal dispute, arising from property transactions dating back to the late 19th century.

The court had been due to hear appeals against the planned evictions – approved earlier by lower courts – on Monday, coinciding with Jerusalem Day, when Israelis mark the city’s reunification during the 1967 Six Day War with a procession through the Old City. (It had been divided between Israeli- and Jordanian-controlled sectors for the previous 19 years.)

After several days of unrest on the Temple Mount, expectations of further violence prompted the government to order a rerouting of the procession, away from the flashpoint Damascus Gate and Muslim Quarter, and then to cancel it altogether. It also prohibited Jews from visiting the Temple Mount, while the court postponed consideration of the Sheikh Jarrah case for up to a month.

Despite those attempts to defuse the situation, more clashes occurred Monday as Palestinians on the Temple Mount threw rocks at security forces, who used stun grenades and rubber bullets to disperse them. Police video showed rocks and projectiles being hurled from inside al-Aqsa, revered by Muslim as the third-holiest site in Islam.

Hamas, meanwhile, lobbed barrages of rockets into Israel – more than 200 by the early hours of Tuesday morning. The U.S.-designated foreign terrorist organization, which seized control of Gaza by force in 2007, said it would continue firing rockets until Israel stopped “aggression in Jerusalem and al-Aqsa mosque.”

The Hamas health ministry said 22 people were killed in Gaza overnight. According to the Israeli military, six Israeli civilians were injured in rocket attacks.

In the interview, Hasan asked Tlaib whether she believes “that the Democratic base is driving the party in a more pro-Palestinian direction that it’s ever been in the past.”

Tlaib agreed with the premise, saying some Democrats who ran in the last election cycle “stood for Palestinian rights unapologetically” and won primaries even against Democratic incumbents.

Tlaib was likely referring in part to Reps. Jamaal Bowman (D-N.Y.) and Cori Bush (D-Mo.), Justice Democrats-endorsed progressives who voiced support for the Palestinian cause and won primaries in 2020 against incumbents – in the former case, against the pro-Israel 16-term veteran Eliot Engel.

As Hasan alluded to, 330 members of Congress, around half of them Democrats, signed a recent letter expressing support for continuing security assistance to Israel.

While progressive Democrats slammed Israel on Twitter on Monday, some of their colleagues voiced support.

“Firing rockets at civilians in Israel is an act of terrorism, period,” said Rep. Ritchie Torres (D-N.Y.) “The latest rocket fire underscores the need for missile defense programs, such as Iron Dome, which protects Israeli civilians – both Arabs and Jews – from the terrorism of Hamas.”

“The U.S. stands with our ally Israel and unequivocally condemns the Hamas rocket attacks against Israeli civilians,” tweeted Kathleen Rice (D-N.Y.). “Israel has a fundamental right to defend itself and protect its citizens from violence.”

Israel is the number one recipient of U.S. military aid. It has not received U.S. economic aid since 2007.