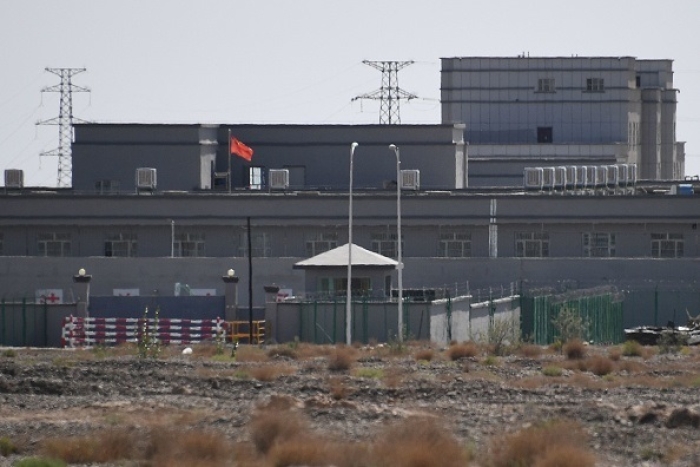 A facility north of Kashgar, Xinjiang, believed to be a re-education camp where mostly minority Muslims are held. (Photo by Greg Baker/AFP/Getty Images)

(CNSNews.com) – The lead Republican on the House Foreign Affairs Committee, Rep. Michael McCaul (R-Texas), is calling on the U.N.’s top human rights official to release a long-delayed report on Xinjiang, where the U.S. and other governments have accused China of committing rights abuses on a massive scale.

“First announced in 2018, it is time for this investigation’s findings to be made available to the world,” McCaul wrote in a letter Thursday to U.N. High Commissioner for Human Rights Michelle Bachelet.

“Failing to release this report will send dangerous signals that the United Nations does not intend to hold the PRC accountable for well-documented human rights abuses, and it will raise serious doubts about the investigation’s independence from political pressure.”

McCaul also voiced concern that the Chinese government could use Bachelet’s upcoming trip to China “to manipulate the United Nations and promulgate lies about their atrocities against the Uyghurs and other minorities.”

Bachelet has been trying to arrange a visit, a first by U.N. high commissioner for human rights since 2005, for almost four years. The visit was finally approved in January, but some human rights advocates suspect Beijing has made it conditional on her not releasing the report.

Last September, Bachelet said the report by her department, the Office of the High Commissioner for Human Rights (OHCHR), was in the process of being finalized, “with a view to making it public.”

In December, an OHCHR spokesperson said the report was expected to be issued within several weeks.

But five months later, it remains unreleased, and an OHCHR spokesperson said recently it would have to be submitted to the Chinese government for its input. 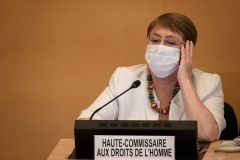 The Chinese foreign ministry has stressed repeatedly that Bachelet’s visit this month is not an investigation, but one designed “to promote exchange and cooperation.”

McCaul told Bachelet he had “grave concern” about the visit.

“I am convinced that CCP [Chinese Communist Party] leadership will undermine the purpose of your visit to investigate and observe the state of human rights in the PRC,” he wrote.

He stressed the importance of “freedom of movement for the OHCHR delegation, freedom of inquiry, confidential and unsupervised contact with local populations through U.N. translators, freedom to record video and gather evidence, and complete access to PRC government documents.”

“[A]ny visit that includes less than full, unfettered, and independent investigative access will be used by the CCP to facilitate the very type of atrocities that your office was created to condemn and will diminish the credibility of your office,” he wrote.

More than 190 human rights and other organizations called on Bachelet in March to release the report immediately.

A spokesperson for the World Uyghur Congress (WUC) said in response to recent queries that it was “extremely disappointed and frustrated with the fact that the high commissioner has been withholding the report since September.”

“Although sharing the report with the country in question might be standard practice, withholding this report from the affected community is extremely regrettable,” the WUC said.

“It reflects the high commissioner’s priorities and concern in keeping the Chinese government more informed in the process than the affected community and civil society organizations.”

The OHCHR has not responded to queries about the process of providing a draft of the report to Beijing, including when this would happen, and how long China would be given to provide its response before its final public release.

“It is imperative that the report be released quickly and not be dependent on, nor delayed because of, a planned trip to [Xinjiang],” they wrote.

“Either of those scenarios would send a terrible message that Beijing is able to delay and evade international scrutiny of its heinous crimes by staging what will likely be a limited trip with access only to areas hand selected by the CCP.”

China is accused of egregious abuses in Xinjiang, including incarcerating more than a million Uyghurs and other minority Muslims in camps.

It denies the allegations, saying the inhabitants of Xinjiang live “happy” lives, and describing the camps as part of a government educational and vocational program designed to “deradicalize” Islamic extremists.

In early 2021 the outgoing Trump administration determined that China had committed crimes against humanity and genocide in Xinjiang, citing the mass deprivation of liberty, torture, forced sterilization, forced labor, and “draconian restrictions on freedom of religion or belief, freedom of expression, and freedom of movement.”

The Biden administration agreed. “Genocide and crimes against humanity occurred during the year against the predominantly Muslim Uyghurs and other ethnic and religious minority groups in Xinjiang,” the State Department said in its annual report on human rights, released in March last year.

UN Says Long-Awaited Report on Xinjiang Muslims Must Be Shown to Beijing Before Release (Apr. 29, 2022)