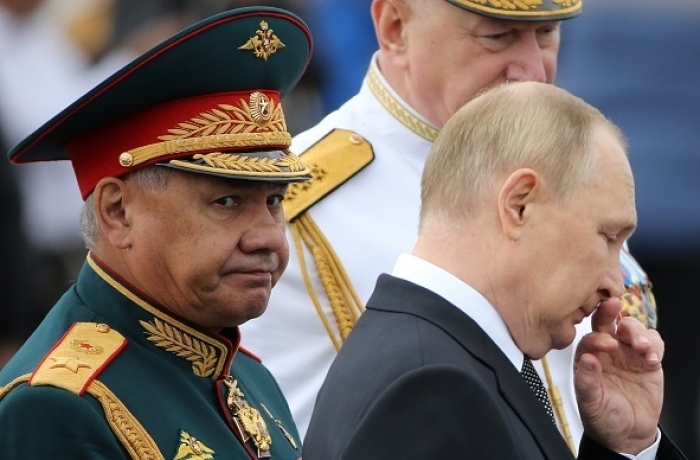 Russian President Vladimir Putin views a parade of warships in St. Petersburg on July 31, Russia’s Navy Day. With him are Defense Minister Sergei Shoigu and the commander-in-chief of the Russian Navy Nikolai Yevmenov. (Getty Images)

(CNSNews.com) – NATO exercises near Russian territory, and a U.S. policy of seeking “to dominate the world’s oceans” are among the greatest threats to Russia’s national security, according to a new naval doctrine signed by President Vladimir Putin on Sunday.

Marking Navy Day, Putin also announced that one of Russia’s most advanced new weapons, a sea-based hypersonic cruise missile, would be ready for deployment within several months.

“The major challenges and threats to the national security and the sustainable development of the Russian Federation related to the world ocean are the U.S. strategic course to dominate the world’s oceans and its global influence on international processes, including those related to the use of transportation lanes and energy resources of the world ocean,” the 55-page document states.

“NATO’s plans of moving its military infrastructure close to the Russian borders and the alliance’s attempts to assume global functions continue to be unacceptable for the Russian Federation and remain a determining factor in its relations with NATO.”

The doctrine says the strategic goals of Russia’s naval policy include increasing combat capabilities, enhancing efficiency in protecting its maritime borders, and protecting Russian national interests in the world’s oceans.

Elsewhere, it refers to plans to boost the building of warships, including aircraft carriers, in the Russian far east, and says Russia will “diversify and step up” its ambitions in the Arctic Ocean.

In a Navy Day speech to officers, sailors, and veterans in St. Petersburg, Putin said Russia would use “all available tools” to protect its waters, from the Arctic to the far-eastern Bering Strait to the Black and Baltic seas.

“The current environment requires commensurate, prompt, and decisive actions from us,” he said.

Putin said the Navy was “capable of instantly responding to all those who decide to impinge on our sovereignty and freedom, successfully carrying out its strategic missions on the borders of our country, and on any latitude of the world ocean, with dignity.”

“Its coastal, surface, air, and underwater forces and other means are highly prepared for decisive action,” he said. “They are constantly being improved.” 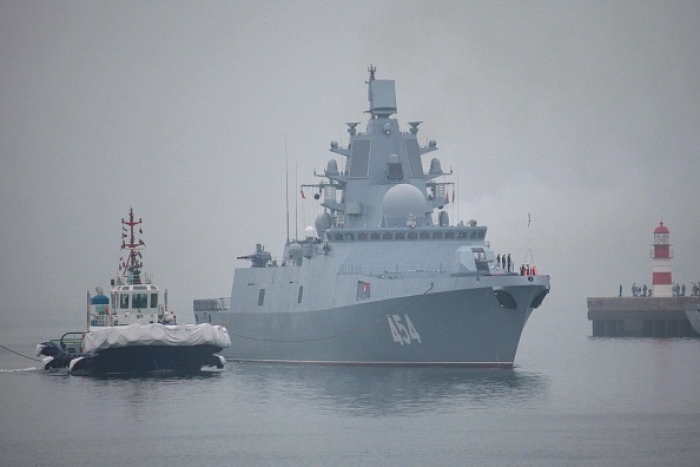 Putin also disclosed that Russia’s new Zircon hypersonic cruise missile would be deployed in the coming months, with the frigate Admiral Gorshkov the first vessel to receive them.

The guided missile frigate, one of the country’s newest warships, falls under the Northern Fleet, although exactly where it would be deployed once equipped with “this formidable weapon,” he said, would be decided based on Russia’s security interests.

Hypersonic cruise missiles are theoretically capable of changing trajectory in flight and so are more challenging for conventional missile defense shields to counter.

Reportedly capable of traveling at nine times the speed of sound and striking targets up to 620 miles (1,000 kilometers) away, the Zircon was among a menu of advanced new weapons in development first announced by Putin in a 2018 speech, in response to what he called “unfriendly steps” by the U.S. such as deploying missile defenses in Europe.

Its first test-launch from a surface vessel was reported to have taken place in early 2020, and a Zircon was launched from a submarine last October.

Amid deepening tensions with the West late last year over a troop buildup near Ukraine’s borders, Russia carried out more Zircon tests, for the first time firing a volley of the projectiles.

Moscow at the time was demanding that the U.S. and NATO provide it with “security guarantees,” including a pledge to refrain from further NATO expansion.

Kremlin spokesman Dimitry Peskov said after the Zircon launches that Moscow hoped they would make its demands for security guarantees “more convincing.”

Russia marks Navy Day annually on the last Sunday in July. Putin in his speech noted that this year’s commemoration coincided with the 350th anniversary of the birth of Peter the Great, the Tsar credited with founding the Imperial Russian Navy.

“Under his guidance, Russia attained the status of a great naval power and authority and influence across the world,” he said.

Putin recently invoked Peter the Great in a different context, implicitly comparing the 18th century Tsar’s “reclaiming” of Russian territory during the Great Northern War against the Swedish empire with his invasion of Ukraine, an episode that has taken relations between Russia and the West to their lowest point since the Cold War.

Ceremonies to mark Navy Day in Russian-controlled Crimea were reportedly canceled on Sunday after a drone carrying a small explosive device exploded at the Black Sea Fleet headquarters in Sevastopol, injuring five people.

Sevastopol governor Mikhail Razvozhayev said on his Telegram channel that Ukraine had tried to “spoil Navy Day for us,” and added that festivities had been “canceled for security reasons.”

The Black Sea Fleet has been based in Crimea since the 18th century, and after the Soviet Union collapsed in remained at Ukraine’s Sevastopol naval base under a long-term lease. The arrangement had been due to expire in 2017, but in 2010 Moscow and Kyiv negotiated a 25-year extension.

Four years later Russia annexed Crimea, after staging a referendum in which a large majority of residents supported joining the Russian Federation.

Most of the international community rejected the referendum and does not recognize Russia’s annexation.